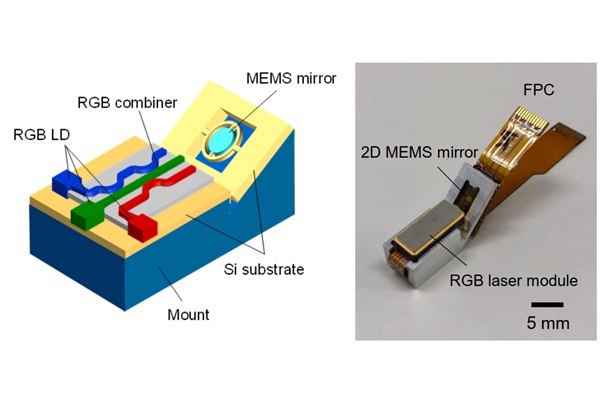 Diagram of the proposed device and the actual implementation, which is compact and thus suitable for wearable devices

Scientists at the University of Fukui, Japan, have achieved remarkable progress in the development of an extremely compact RGB laser projector that can create a high definition (HD) projection image. Their device uses a waveguide-type coupler to produce perfectly aligned RGB output beams from three independent lasers and a microelectromechanical mirror to create high-resolution scanning images. With further refinements, this technology could become a mainstay in wearable displays such as smart glasses.

Thanks to the remarkable progress that has been made in miniaturization over the last decade, wearable electronic devices that were considered far-fetched in the 2000’s are within reach. Prime examples of such technology are smart glasses and similar head-mounted displays, which leverage recent advances in virtual and augmented reality to create an immersive experience or provide hands-free utilities.

However, existing prototypes of smart glasses and wearable displays suffer from certain limitations that hinder their commercialization, such as bulkiness, battery life issues, and sub-par image quality. However, at the University of Fukui, Japan, scientists have been making steady progress towards creating an incredibly small yet powerful image projector for eyewear displays. In fact, in collaboration with SEIREN KST Corp., a Japanese silicon manufacturer, they’re getting ready to commercialize their latest innovations within a year.

In their latest work, which was presented at the 27th International Display Workshop (IDW ‘20), they succeeded in creating an optical engine by integrating a compact RGB laser module measuring only 8×4×3 mm with a microelectromechanical (MEMS) mirror. The direction in which the MEMS mirror reflects light from the laser module can be controlled electronically, making it possible to project high-quality 2D images through laser scanning over the projected area.

One challenging aspect of making the laser module was combining the light beams from three independent laser sources to obtain an RGB output. To achieve this, the scientists used a waveguide-type combiner, where each of the three waveguides receives light from each of the primary colors. Although only the center green waveguide is connected to the actual optical output, the blue and red light travelling on adjacent dead-end waveguides are passed to the center waveguide through strategically placed couplers. “The measured efficiency of the combiner was as high as 97%, which represents a loss of only 0.13 dB,” remarks Asst. Prof. Akira Nakao from the University of Fukui, lead author of the study. “The outputs from the individual RGB lasers end up perfectly aligned thanks to the nature of the waveguide-type combiner,” he adds. Moreover, by using an achromatic lens, an excellent circular focused beam is achieved, while also providing the option to use other lenses to produce collimated beams with larger diameters.

The laser beam scanning module can project 1280×720 color video by tuning the MEMS driving frequency. These characteristics, together with its small size and its potentially low battery consumption, make the proposed laser scanning projector a promising device for wearable displays. Further tuning will be required to make it possible to safely project images directly onto the retina of the human eyes, but this is something the scientists have been working on and the foundations of this new technology have been laid.

Excited about the results, Asst. Prof. Nakao comments: “At the University of Fukui, we are trying to stir things up in the wearable display industry by developing smart glasses with optical engine, driver circuit, projector, and battery all integrated in one single device.” The applications of wearable displays also go beyond those of virtual and augmented reality for entertainment and could allow for better conferencing, surveillance, and even remote-assisted surgery. Expanding further upon these possible applications, Asst. Prof. Nakao says: “For now, our unit can be used in laser microscopes, sensors, projectors, and HUD displays, particularly those for novel automobile systems with intelligent driving technology, which are all set to reshape our future.”

Let’s hope further progress in this field takes us soon to this projected future!