Chemical engineers from ETH Zurich have succeeded in generating ultra-pure green light for the first time. The new light-emitting diode will pave the way for visibly improved colour quality in a new generation of ultra-high definition displays for TVs and smartphones.

Chih-Jen Shih is very satisfied with his breakthrough: “To date, no one has succeeded in producing green light as pure as we have,” says the Professor of Chemical Engineering in his laboratory at the Hönggerberg campus. He points at an ultra-slim, bendable light-emitting diode (LED), which displays the three letters “ETH” in a fine hue of bright green.

No one has succeeded in producing green light as pure as have ETH Chemical engineers. (Photos: Sudhir Kumar, Jakub Jagielski)

Shih’s progress is significant, particularly in terms of the next generation of ultra-high resolution displays used for TVs and smartphones. Electronic devices must first be able to produce ultra-pure red, blue and green light in order to enable the next generation of displays to show images that are clearer, sharper, richer in detail and with a more refined range of colours. For the most part, this is already possible for red and blue light; green light, however, has hitherto reached the limits of technology.

This is due mainly to human perception, since the eye is able to distinguish between more intermediary green hues than red or blue ones. “This makes the technical production of ultra-pure green very complex, which creates challenges for us when it comes to developing technology and materials,” says Sudhir Kumar, co-lead author of the report. 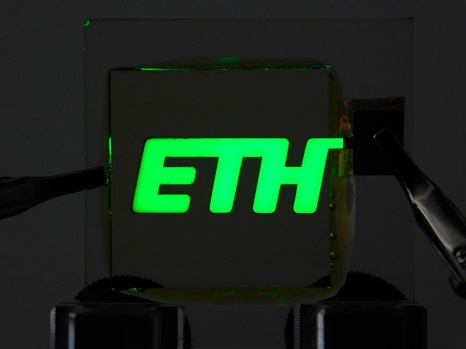 The ETH logo is shown in ultra-green with the new LED technology.

Up to 99 percent ultra-pure green

It becomes clear from reference to the Rec.2020 standard just how much progress Shih’s ultra-green light has made in the development of the next generation of displays. The international standard defines the technical requirements for ultra-high resolution (known as “Ultra HD”) displays and provides a framework for further research and development. The requirements also include an improvement in colour quality visible to the naked eye. The standard provides the colour scale that a display can reproduce and therefore a broader range of colour hues.

Ultra-pure green plays a key role in extending the colour range, or gamut. Ultimately, new hues are created through the technical mixture of three base colours: red, blue and green. The purer the base colours, the broader the range of hues a screen can display. Shih’s new LED is in line with 97 to 99 percent of the Rec. 2020 standard. By comparison, the purest colour TV displays currently available on the market cover on average only 73.11 to 77.72 percent; none exceeds 80 percent. 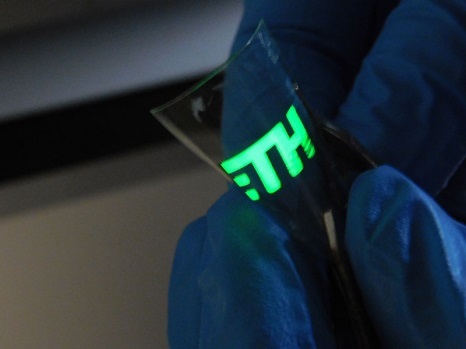 An LED is as flexible and bendable as a sheet of paper and can even be produced at room temperature.

Wendelin Stark, ETH Professor of Functional Materials Engineering, along with researchers from South Korea and Taiwan, also contributed to the project results, which have been published in the scientific journal Nano Letters. Shih not only made a breakthrough in terms of the results, but also in the material and method. He and his colleagues have effectively developed an ultra-thin, bendable light-emitting diode able to emit pure green light using simple room-temperature processes. Shih says that this is the second aspect of his breakthrough and is at least equally important, as until now high-temperature processes were required to produce pure light with LED technology. “Because we were able to realise the entire process at room temperature, we’ve opened up opportunities for the simple, low-cost industrial production of ultra-green light-emitting diodes in the future,” says Jakub Jagielski, co-lead author of the report.

More specifically, Shih and his team used nanomaterials to further develop the LED technology. A light-emitting diode usually contains a semiconductor crystal that converts electrical current passed through it into radiant light. The raw material is usually indium gallium nitride (InGaN); however, this material does not have the ideal properties for production of ultra-pure green light. So Shih’s team instead used perovskite, a material that is also used in the manufacture of solar cells and which can convert electricity into light relatively efficiently. It is also inexpensive and helps make the manufacturing process simple and fast – it takes just half an hour to chemically clean perovskite and make it ready for use, says Shih.

The perovskite material in Shih’s light-emitting diode is a miniscule 4.8 nanometres in thickness. This is an important factor, since the colour quality depends on the thickness and form of the nanocrystal used. In order to reach the desired pure green, the crystals should not be any thicker or thinner. These flexible, ultra-thin light-emitting diodes are as bendable as a sheet of paper. Hence, they can be produced inexpensively and quickly using the existing roll-to-roll process for example. Shih says this will also benefit industrial production in the future. 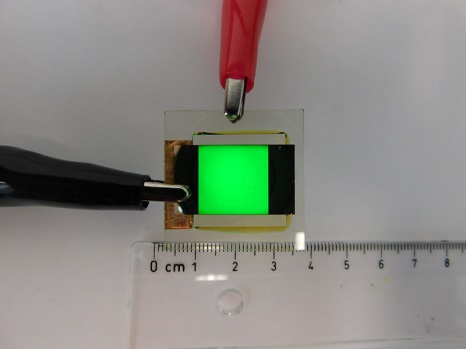 The ultra-green light-emitting diode made by new “two-dimensional nanocrystals” of a miniscule 4.8 nanometres.

However, it will still take some time before we see the first industrial application of ultra-green light-emitting diodes. The next step for Shih is to first improve the efficiency. Today, his LED works at 3 percent efficiency when converting electricity into light; in comparison, TV screens currently available on the market have efficiency values of 5 to 10 percent. Shih is hoping that the next version will be 6 to 7 percent more efficient. He also sees potential for improvement in the lifespan of his light-emitting diode. Currently, it illuminates for about two hours, whereas screens available on the market should work for many years. The invention was filed for a patent.