Shining Light Deep into the Brain 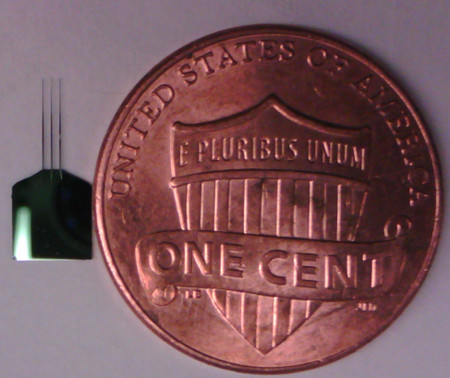 Researchers in the laboratory of Michael Roukes have created a new type of optical brain probe for studying and mapping animal brains in vivo. The ultrathin silicon-based probes are shown here next to a penny for scale. Credit: Roukes Lab/Caltech

To map the inner workings of the living brain, scientists have long employed various types of brain probes, beginning with simple electrical wires and moving on, in the past two decades, to advanced multi-electrode arrays. More recently, in a new field called optogenetics, researchers have begun probing the brain functions of animals with light. Light from the optical probes activates genetically engineered neurons in the brain, allowing their functions to be mapped.

But even optical probes have their limits. The light used to excite them can illuminate too many neurons simultaneously, making it hard to target specific areas of interest.

Now, researchers at Caltech have developed a new type of optical brain probe based on nanotechnology and the same optical communication technology used to carry internet data around the globe. The new ultrathin silicon-based probes are able to send light deep into the brains of animals to precisely target circuits of neurons that control cognition, behavior, and body functions.

"Tools for delivering light deep into animal brains are still rather primordial," says Michael Roukes, the Robert M. Abbey Professor of Physics, Applied Physics, and Bioengineering at Caltech and principal investigator behind the research. "So, we decided to develop the next generation of brain probes." The probes were described in a paper that appeared in the journal Neurophotonics.

New silicon-based optical brain probes can deliver light deep into the brains of animals, allowing scientists to map and study the function of neurons. As seen in this image of a probe, the devices can deliver patterns of light into brains, which can be used to activate or deactivate sets of neurons within brain circuits.
Credit: Roukes Lab/Caltech

"These new silicon probes are much smaller than currently used optical fibers­­­ and are much gentler on the brain," says the paper's lead author, Eran Segev, a senior postdoctoral fellow in applied physics and materials science at Caltech, who was a Kavli Nanoscience Institute (KNI) Prize Postdoctoral Fellow while performing the research. "We can better target small circuits of neurons or portions of brain circuits."

Neurons operate collectively as circuits to yield consciousness, memory, and to sense and control body functions, including hunger, sleep and movement, and many other behaviors. With optogenetic techniques, researchers can use light to specifically activate or silence neurons within the brain and assess their roles. Optogenetic methods genetically engineer neurons to respond to light. For example, blue light is used to activate neurons that have been modified to produce a protein called channelrhodopsin. Conversely, yellow light is used to inhibit activity in neurons engineered to express a protein called halorhodopsin.

This technology can be employed, for example, to study how the hunger system in mice operates. A researcher could use yellow light to silence neurons responsible for the sensation of hunger, then watch the mice to assess whether they continue to seek food.

With the new silicon-based photonic probes developed by Roukes and his colleagues, researchers can now more precisely control experiments like these. As described in the paper, the new probes can target individual neurons while simultaneously minimizing displacement of brain tissue and providing access to areas deeper in the brain than previously possible. Segev says that a subsequent generation of probes, currently in development, will also be able to create patterns of blue, yellow, and other wavelengths of light—allowing investigators to simultaneously turn on and off various neurons in a brain circuit, for instance.

"This is just the beginning—the teaser," says Caltech research scientist Laurent Moreaux. "Now that we have realized this light-delivery technology, we will combine it with various light-detection methods to, in essence, create a nano-sized microscope within the brain itself."

"This project is very interdisciplinary," says Roukes. "It involves a tight partnership between physicists, biologists, and neuroscientists."

Andrei Faraon (BS '04), assistant professor of applied physics and materials science and a co-author on the study, provided early assistance with the probe designs and laboratory characterization.