A researcher uses a pipette to put a sample on to a molography chip. Photograph of the experimental set-up in the ETH Zurich laboratory. (Photograph: ETH Zurich / Andreas Frutiger)

Scientists at ETH Zurich and Roche have developed a completely new method for the analysis of molecules in liquids on a chip. The possible applications of this technology are immense. It has the potential, inter alia, to revolutionise medical diagnostics.

Much can be detected in blood or urine: viral illnesses, metabolic disorders or autoimmune diseases can be diagnosed with laboratory tests, for instance. But such examinations often take a few hours and are quite complex, which is why doctors hand the samples over to specialist laboratories.

Scientists at ETH Zurich and the company Roche have jointly developed a completely new analysis method based on light diffraction on molecules on a small chip. The technique has the potential to revolutionise diagnostics: in future, physicians may be able to perform complex examinations easily and quickly in their own practice.

As with other established diagnostic procedures, the new method also uses the key-lock principle of molecular recognition: for instance, in order to determine a particular protein dissolved in the blood (the “key”), it must dock on to a suitable antibody (the “lock”). In established immunological test methods, the “key in the lock” is made visible with a second colour-coded key, but this step is no longer necessary in the new process – the “key in the lock” can be made visible directly with a laser light.

The scientists use a chip with a specially coated surface made up of tiny dots with a specific striped pattern. The molecules in question bind to the stripes but not to the interstices between the stripes. If a laser light is now directed along the chip’s surface, it is bent (diffracted) as a result of the special arrangement of the molecules in the pattern and focused on to a point below the chip. A point of light becomes visible. When the scientists put samples without the molecules on to the chip, the light is not bent and no point of light is visible. 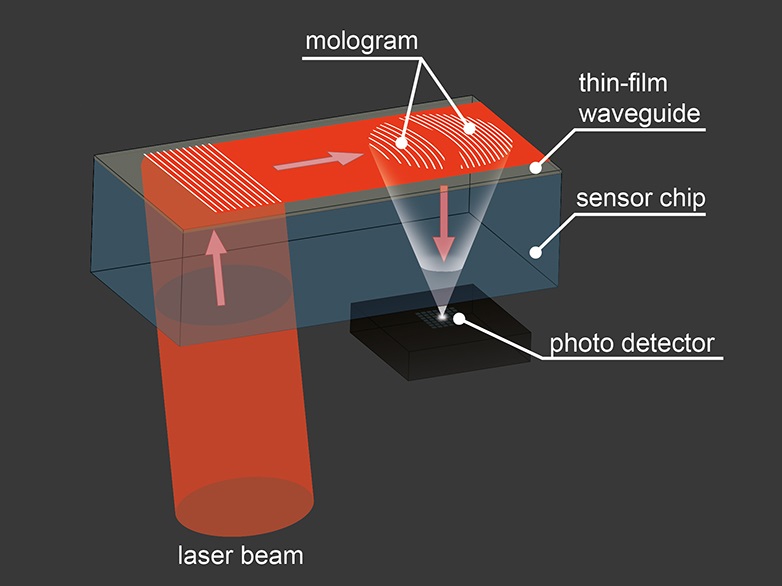 Laser light propagates in a thin-film waveguide and – if the molecules under examination bind to the mologram – it is deflected there and focused onto a focal point. (Visualisations: Gatterdam et al. Nature Nanotechnology 2017)

“The point of light is an effect of the interplay of hundreds of thousands of molecules in their specific arrangement,” says Christof Fattinger, a scientist at Roche. “As with a hologram, the wave character of the laser light is used in a targeted manner.”

Janos Vörös, professor of bioelectronics at ETH Zurich, compares the principle to an orchestra: “The molecules are the musicians, the stripe pattern the conductor. It ensures that all the musicians work in concert.” The scientists call the striped pattern “mologram” (molecular hologram) and the new diagnostic technique “focal molography”.

Fattinger invented the principle and developed its theoretical foundations. Five years ago, he took a sabbatical in the group led by Vörös; the practical implementation of molography has now emerged from that collaboration between the Roche scientists and ETH Zurich. 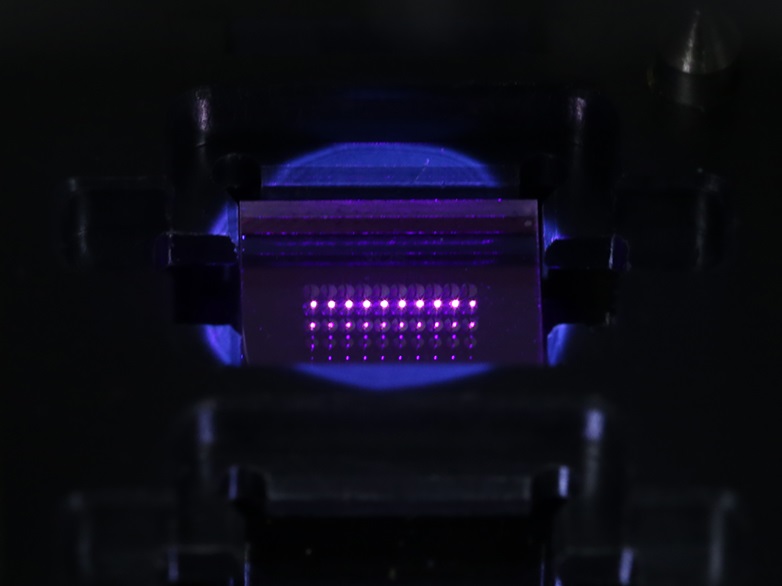 A chip is coated with 40 molograms by means of lithography (four rows with ten molograms each). The image shows quality control with laser light. (Photograph: ETH Zurich / Andreas Frutiger)

Other molecules do not disrupt

A significant advantage of the new method is that the signal (the point of light) comes about only because of the molecules that bind specifically to the mologram – other molecules present in a sample do not produce a signal. The method is therefore substantially faster than previous analysis methods based on the key-lock principle. In the latter, other molecules present in a sample have to be washed away, which in turn slows down and complicates the diagnosis. This makes the new method ideal for measuring proteins in blood or other bodily fluids.

“We expect that this technology will enable more laboratory tests to be performed directly in the doctors’ office in the future rather than in a specialist laboratory. And in the distant future, patients may even be able to use the technology at home,” says Vörös. 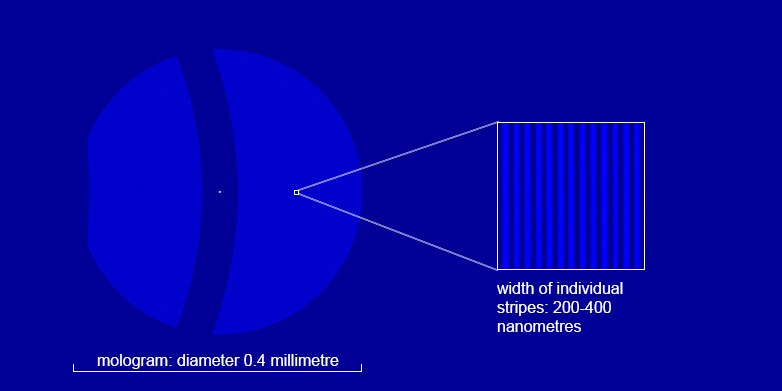 Several molograms are arranged on a small chip. In the current design, 40 molograms measure the same molecule, but in future it may be possible to measure 40 or more different markers simultaneously on a chip.

The possible applications of this new technique are immense. It could be used wherever the interaction between molecules needs to be identified and investigated. The method is so fast that it is even suitable for real-time measurements, which is of particular interest for basic biological research: for example, to examine how quickly one biochemical molecule binds to another. Further applications might include quality control for drinking water treatment or process monitoring in the biotechnological industry.

“The fact that we were successful in putting the idea into practice is due largely to the fact that our project team is interdisciplinary,” says Vörös. Among the participants were experts in photochemistry, chip manufacturing and surface coating. The scientists also used special coating polymers for the mologram, which were developed recently in the laboratory of ETH professor Nicholas Spencer (ETH News reported). “Without these polymers and without the collaboration with Janos Vörös, we would still be far from our goal,” says Fattinger.

In order to develop the method further, the collaboration between Roche and ETH Zurich will continue. While several scientists and doctoral students in the Vörös’ group are working on its scientific aspects, the partners also plan to explore commercialisation opportunities for various applications.