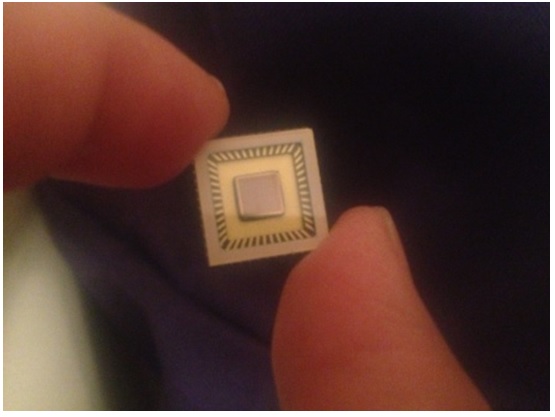 Global infectious disease threat
Infectious diseases remain a great health threat to the world as millions die each year from a variety of these diseases. More recently, the world is facing a new wave of microbial threats such as drug-resistant TB, MRSA, hepatitis, HIV, and recently Ebola in West Africa. The toll is especially high in developing countries. Aging population and urbanization in many of these countries have made combating infectious diseases an even greater challenge.

The broad use of antibiotics, which has become a common practice today, further exacerbates the situation in many ways. Indiscriminate use of antibiotics has shown to be linked to the many cases of surging drug-resistant viral and bacterial pathogens. The research community has long come to the realization that the world really needs a method to rapidly and accurately identify infectious pathogens, enabling physicians to respond quickly by prescribing narrow targeted antibiotics and anti-viral drugs to save lives and to prevent further spread of lethal and drug resistant pathogens at the same time.

In the past 10 plus years we have seen great advancement in molecular diagnostics technology. Doctors can now use nucleic acid (DNA, RNA) or protein (antibody) analysis to get very precise answers about the type of virus and bacteria cells behind each case of infectious disease. However, much of the world's population still does not have access to, or at least does not have timely access to, these technologies. This is largely due to the cost and bulkiness of the equipment required.

Today’s molecular diagnostics systems are designed for use in professional labs (i.e. "reference labs" in developed countries). Patient samples collected at point-of-care are packaged and transported to these labs in order to be tested in batch mode. This model is not suitable for the many small hospitals and clinics in remote areas of developing countries where resources are limited.

Thus there has been a push to develop portable diagnostics technologies that would enable precise and timely testing of infectious diseases, using the latest molecular methods, at the point-of-care. Such solutions should be affordable to a majority of the developing countries where infectious diseases hit the hardest.

In recent years, the research and industrial communities have tried many different methods to achieve portable and automated molecular diagnostics solutions. Much effort has been put in developing novel microfluidics (e.g. DNA microarrays and Microfluidic ELIZA) technology to help miniaturization. However, microfluidics technology alone fell short of providing a complete solution for miniaturized molecular diagnostics. Microfluidics allows reactions between samples and diagnostics assay to take place in a small, confined chip platform. But these microfluidics chips still need to be scanned or "read out” by such instruments as fluorescent microscopes or special purpose instruments serving such purpose. The small reaction volume and dense reaction sites in microfluidics chips put an even higher performance requirement on these instruments, making the total solution bulky and expensive.

A majority of today’s molecular diagnostic chemistry uses optical methods to detect molecular events based on the principle of fluorescence and chemiluminescence signaling [1]. To meet the sensitivity requirement, engineers have to resort to such special-purpose devices as photon multiplier tubes (PMT) or cooled Charge Coupled Devices (CCDs). PMT and CCDs are not only expensive, but also require bulky and sophisticated electronics, cooling systems and power supply to support their operation. To find a less expensive and smaller alternative, Anitoa engineers turn to CMOS image sensors, a technology used today for low-cost consumer digital and cell phone cameras, which is capable of unmatched level of integration and low power.

Recent innovations of CMOS image sensors have made it possible to achieve much better sensitivity than what was possible before. More improvements in process, circuit, and software are still needed to enable CMOS to match the sensitivity of PMT and CCDs. To meet this challenge, engineers at Anitoa use novel manufacturing process technology and circuit design to reduce the noise inherent in CMOS image sensors to achieve a high signal-to-noise ratio (SnR). The excessive noise that cannot be eliminated in the chip due to limitations of physics is further computed and filtered through a proprietary software algorithm, called “Intelligent Dark-current Management” algorithm. Anitoa’s Intelligent Dark-current Management algorithm “understands” the statistical nature of the CMOS noises, and computationally separate them out and then eliminate them.

With this approach, Anitoa has fabricated a CMOS image sensor, called ULS24. ULS24 is built on a 0.18um CIS technology from a world-leader specialty foundry. This chip has been shown to achieve 3e-6 lux detection sensitivity, capable of detecting just a few molecules labeled with fluorescence reporter probes.

Anitoa has tested its ULS24 CMOS molecular imager with a variety of applications, including DNA quantification and qPCR.

DNA detection and quantification is one of the most common procedures in molecular biology. It is frequently performed to evaluate the yields of DNA during purifications and amplification procedures such as PCR; or detect residual DNA in samples such as drug and protein preparations.

The most commonly used technique today for measuring nucleic acid concentration is the determination of absorbance at 260 nm (A260). The major disadvantages of the absorbance method are its relative insensitivity (an A260 of 0.1 corresponds to a 5 ug/mL dsDNA solution), its inability to distinguish between signals from DNA and RNA. Fluorescence nucleic acid stain such as PcioGreen® (Life Technologies) will fluoresces on binding to double-stranded DNA. The reagent has been developed as the basis of a highly sensitive DNA assay kit.  The assay has found wide acceptance within the research community for several reasons.  Fluorescence dye–based fluorescence assays are up to 10,000-fold more sensitive than UV absorbance measurements.

Results
A series of concentration samples containing 0ng, 5ng, 10ng, 15ng, 20ng and 30ng of dsDNA is prepared. Fluorescent readouts were recorded for each sample and repeated several times.  The system is “blanked” using 0ng sample to create a dark image. We chose a fixed integration time to establish the signal gain of the system, and found that 200ms is adequate.

The captured image is processed by simply averages the pixel digital readout that defines the light spot.

Below is a series of images of the light spot.

The results of analyzing samples are shown below in Figures 3. 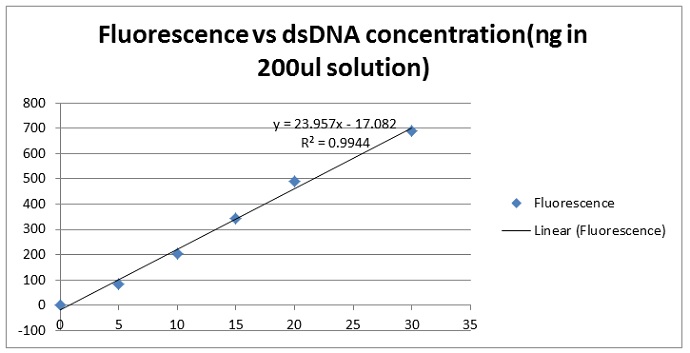 The line describing the concentration dilution series  had  a correlation coefficient r=.9944, Closer examination of the curve  demonstrates that the linear detection range of the PicoGreen(r) assay using the ULS24 extends over three orders of magnitude.

Using a SnR ~10dB or 3-fold over background noise (standard deviation of measurement results) we determined that the assay sensitivity for the gain setting of 200mS integration was 1.0 ng. This represents >500 fold improvement in the sensitivity of this method over the standard A260 method shown in the literature.

CMOS ultra-low light imager combined with wavelength filters provides a very sensitive solution for detecting DNA stained with fluorescence dye. Not only can this method measure the presence and quantify DNA at very low concentration, it does it with low power excitation light source such as LED, and with a short integration time. This not save system power and speed up detection while the assay maybe going through rapid reaction, minimum excitation power also reduces risks associated with photo bleaching, thus improving assay repeatability.

When it comes to detecting very small amount of pathogenic molecules, such DNA molecules released from viruses or cancerous cells, it is important that the method is not only sensitive, but also specific.

qPCR achieves sensitivity and specificity through combined amplification and detection.  qPCR can cause target DNA strands be selectively replicated millions of times, with the help of a special enzyme called polymerase. As the target DNA strands being replicated, they bind with specially design molecular probes that are labeled with fluorescence materials. 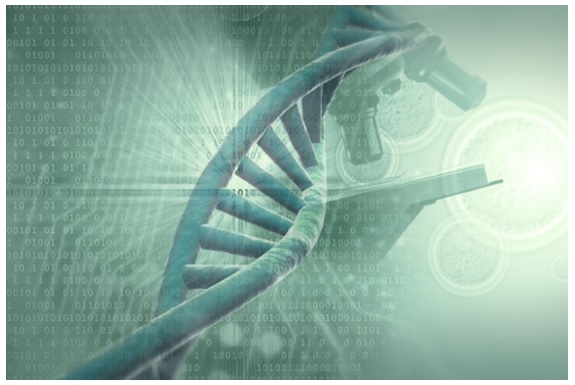 DNA amplification and detection with qPCR

With the high sensitivity and signal-to-noise ratio of Anitoa's CMOS molecular imager, system designers get many benefits. The advanced capabilities of our CMOS imager allow engineers at Anitoa to take advantage of microfluidics innovations. Microfluidics uses very small reaction volume and densely packed reaction sites. This potentially results in smaller platforms and faster reaction time, provided that the optoelectronic subsystem is also up to the job. Anitoa's CMOS molecular imager has precisely the needed sensitivity, fast integration time and true imaging capability to complement microfluidic systems. With this combination, engineers at Anitoa are in the process of building a palm-sized microfluidic qPCR system that will work with today’s off-the-shelf diagnostic assays.

Anitoa envision in the near future, small and portable molecular diagnostics devices would be deployed at point-of-care, enabling rapid diagnostics of infectious disease on-the-site, so that doctors can respond quickly with life-saving drugs and treatment, and prevent the further spread of these diseases. The diagnostics device will be internet enabled, and the diagnostic results will be transmitted to a central database in the cloud, allowing doctors, drug companies and policy makers to make better-informed decisions on global epidemic control. (For more information, please contact Zhimin Ding at Zhimin.ding@anitoa.com)

[1] Electrochemical molecular sensors have shown promise for miniaturization. But they require sophisticated surface chemistry and suffer from stability and specificity problems.