Figure 1: Left - a schematic of exciton-polariton microcavity with the Su-Schrieffer-Heeger (SSH) geometry. Right - light emission from the topological defect mode.

Researchers Meng Sun, Ihor Vakulchyk, and Ivan Savenko from the Center for Theoretical Physics of Complex Systems (PCS) within the Institute for Basic Science (IBS, South Korea), along with an international collaboration of physicists from Germany and the United Kingdom demonstrated the first highly coherent polariton laser based on topological mechanisms. They employed some of the most advanced technologies to produce an exciton-polariton microcavity supporting a topological defect mode (see Figure 1), measured the properties of the system, and built a theoretical model explaining them.

Topological phenomena - a unique family of purely geometrical effects -- appear in a wide variety of physical systems. One property of great interest is the existence of edge states that are robust against scattering by defects due to the topological protection. Exciton-polariton is a type of polariton that arises from the strong coupling between the confined light mode in a microcavity and an excited matter (exciton) mode. Topological phenomena in polaritonic systems are drastically different from those in other platforms due to the hybrid light-matter nature of these quasi-particles.

In this work, the researchers built a semiconductor microcavity based on the etch-and-overgrowth process. This platform was able to experimentally achieve lasing at specific wavelengths by confining the exciton-polaritons to topologically protected edge states. In particular, they demonstrated that strong coherence can be attested by the so-called temporal coherence function g(2) (τ). The IBS researchers furthermore built a theory that can explain the source of this coherence phenomenon. They utilized a quantum trajectories method, which is one of the most powerful microscopic techniques to solve the Lindblad master equation that describes systems in contact with the environment. The simulation results appeared to closely reproduce experimentally measured data at higher pumping power (see Figure 2). 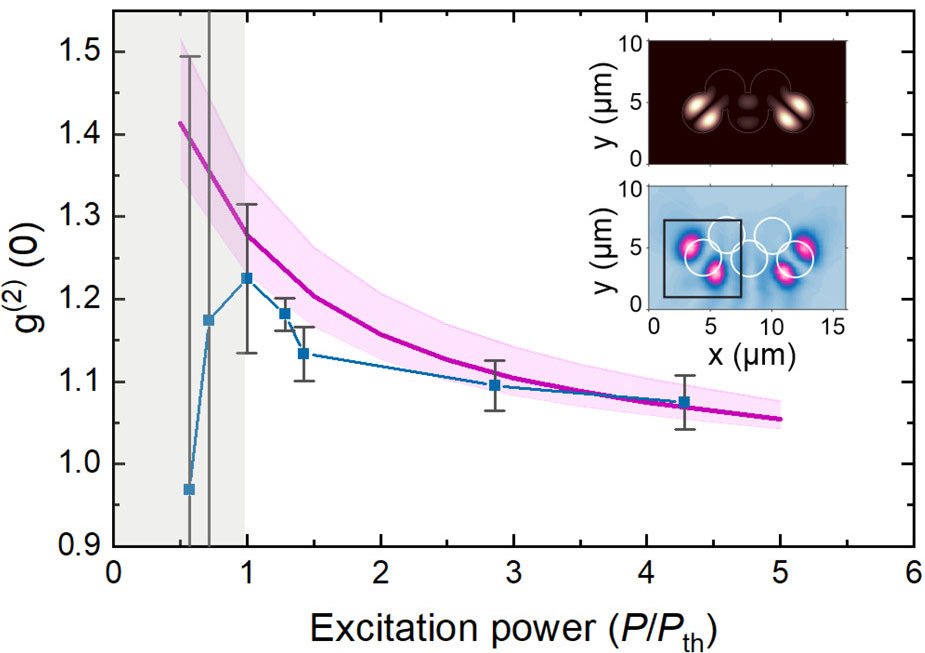 “This study is exemplary in its representation of modern research, which combines state-of-the-art experimental techniques and novel sophisticated all-quantum theoretical tools. It was a great opportunity to discover new fundamental and application-oriented properties of light”, comments Ivan Savenko, the leader of the Light-Matter Interaction in Nanostructures (LUMIN) team at PCS IBS.