It has been said that the internet exists chiefly to show videos of cats interacting with boxes. 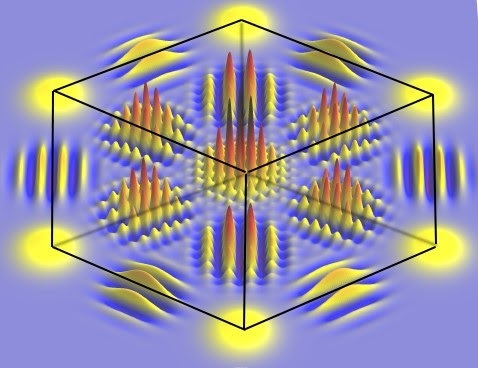 The first new quantum state in the family of hypercubes states shown in position, momentum space.

An international team of researchers led by The University of Queensland has extended cats and boxes into the quantum realm, discovering that Schrödinger’s famous dead-and-alive cat is just one of an infinite family of quantum states.

Creating these hypercube states – in this case using single particles of light and a tiny mechanical drum – is an important ingredient in quantum technologies.
“The Schrödinger cat state, discovered in 1935, is a quantum superposition of two states, normally referred to as ‘dead’ and ‘alive’.

“In 2001, a relative of the cat was introduced - the compass state, which is made up of a superposition of four different quantum states arranged in a compass form.”

The study showed that the cat and the compass state are just the smallest two members of an infinitely large family of hypercube states.

University of Innsbruck’s Dr Martin Ringbauer, who guided the research, said that hypercube states consist of multiple quantum superpositions that map out the corners of multidimensional cubes.

“We discovered these quantum hypercube states by accident while experimenting with methods to create quantum states that could be useful in quantum sensors,” Dr Ringbaurer said.

Centre of Excellence for Engineered Quantum Systems researcher Dr Till Weinhold said that these quantum states could be used in future quantum technologies, such as super-sensitive sensors.

“When we use a ruler to measure distance, the smallest distance that can be measured depends on the grading of the ruler,” Dr Weinhold said.

“Usually quantum mechanics tells us that one cannot make the grading on the ruler finer and finer.

"Hypercube states get around this limit by using quantum interference to create features much smaller than otherwise possible."

“These states allow us to exploit quantum properties to measure at scales far below what is classically possible."

The paper is published in New Journal of Physics.