The study published in Nature Communications is able to characterize high-order nonlinear susceptibilities in a crystal with the use of HHG, instrumental in signal manipulation for optoelectronics. 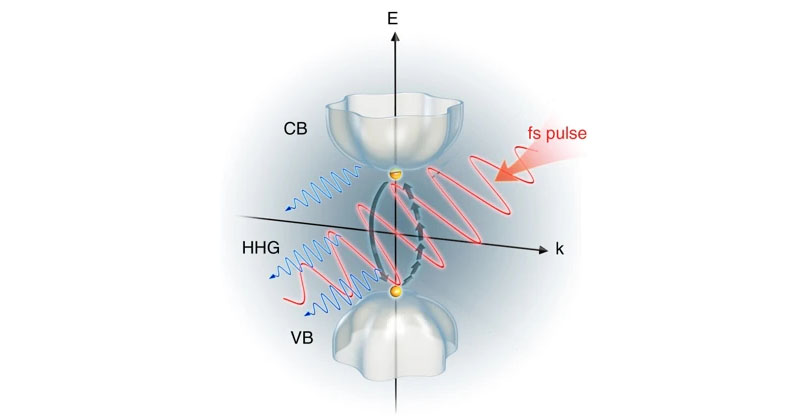 Schematic illustration of the interband and intraband mechanisms in a solid

Generating high-order harmonics as a response of the laser-matter interactions have become a unique tool to explore the nature of the ultrafast electron dynamics in gases as well as observe the nonlinear dynamics of these electrons without damaging the material, when solid samples are used as active media. High harmonic generation (HHG) is important for creating pulses of light in the attosecond regime, allowing scientists to record the sub-femtosecond electronic transitions in gases.

A key feature of HHG in an atomic gas is that the electrons ionized by a short laser pulse recombine with their parent atoms, giving off the energy gained from the laser field during recollision in the form of radiation in the UV and soft X-Ray region.

In a solid, the electron can recombine with any other atom in the crystal lattice. This “delocalization” is poorly understood, yet believed to be important for attosecond pulse generation and real-time imaging of the electronic wave function in the solid state or the electron density. In addition, in addition to the above-mentioned recollision scenario (described within a non-perturbative interband HHG framework), intraband transitions and Wannier-Stark localization have been found to make important contributions, depending on the material and laser parameters.

In a recent study published in Nature Communications, an international team of scientists from South Korea, Germany, USA, in collaboration with former ICFO researcher Alexis Chacon and ICREA Prof. at ICFO Maciej Lewenstein, as well as scientists from other research centers, including collaborator Dr. Marcelo F. Ciappina from ELI-Beamlines, Czech Republic, show how to use HHG in suitable regimes to cleanly extract much higher order susceptibilities in solids and therefore achieve unprecedented characterization of nonlinear electronic response directly based on experimental measurements.

In their study, the team of researchers used sapphire crystal wafers for the experiment since this material acts as both an HHG emitter and a strong EUV absorber, so that the observed HHG is produced within a few tens of nanometers, and shined 12-fs infrared laser pulses at (800 nm) onto it. In previous experiments, scientists had been able to discern between different possible mechanisms generating HHG in solids, which may be due to either interband transitions (resulting from multi-photon absorption or tunneling) or intraband transitions. Both interband and intraband HHG have been previously observed in solids, with recollision being directly analogous to the HHG in atomic gas for the interband case, while intraband oscillations being unique to solids and determined by the shape of the conduction band. In their experiment, the team was able to demonstrate that high harmonics was indeed produced by the multi-photon interband transitions.

Now, having established that the high harmonics are due to interband transitions in the multi-photon regime, they were able to extract orientation-dependent high-order nonlinear susceptibilities of the material. It should be noted that higher order nonlinearities are believed to be crucial to signal manipulation in optoelectronics by affecting the electron response time and refractive index. The susceptibilities obtained in this study have a periodicity that depends on crystal orientation, suggesting a possibility of multichannel signal processing at PHz frequencies by controlling the electron response time and refractive index using laser polarization.