An international team of researchers is able to generate for the first time time-varying OAM beams of light. 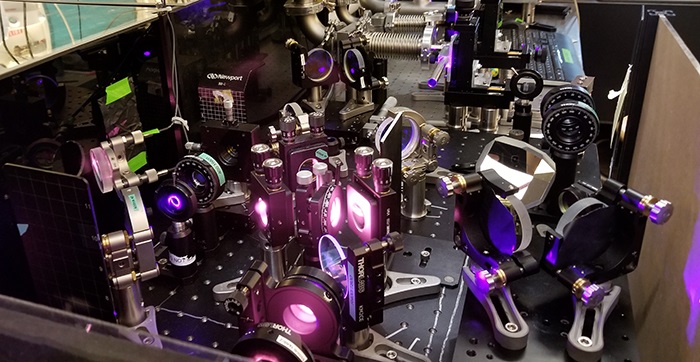 One of the experimental high-harmonic generation laboratories (beamlines) in the Kapteyn-Murnane group in JILA at the University of Colorado Boulder where the self-torqued light beams were produced.

Twenty years ago, scientists realized that light could be twisted around its axis, that is, it could possess orbital angular momentum (OAM) when the spatial shape of the beam of light rotates (or twists) around its own axis. The presence of OAM in a light beam can be revealed when the light interacts with matter, for example, by forming an “optical spanner” that makes tiny particles rotate. So far, different studies have searched for, and found, a multitude of ways to manipulate static OAM beams, that is, light beams whose OAM does not vary in time.

However, in a new study recently published in Science, researchers from the University of Salamanca, the University of Colorado Boulder and NIST, together with ICFO researchers Emilio Pisanty and ICREA Prof. at ICFO Maciej Lewenstein, have presented and experimentally confirmed the creation of dynamical pulses of light whose OAM changes over the duration of the pulse. This gives these pulses of light a new property, known as the self- torque of light.

Even though self-torques can be found in several other physical systems (e.g., electrodynamics and general relativity), this is the first time that this property has been shown to exist in light. This is made possible by the highly nonlinear processes that occur when light of very high intensities interacts with matter.

In their experiment, the team of researchers took two femtosecond infrared (IR) pulses of 800nm, with different OAM and with a time-delay between them, and focused them on a gas of argon atoms. By shining these two collinear time-delayed pulses on the gas, they were able to generate an extreme-ultraviolet (EUV) self-torqued beam through a nonlinear process known as high-harmonic generation (HHG) when the pulses interacted with the matter.

In the process of generating the EUV beam, the researchers engineered a way to have the wave-fronts of the IR first pulse become integrated into the wave-fronts of the second pulse, and because of the time delay between both, the final EUV pulse that was created and emerged from the system did so varying the OAM in timescales of femtoseconds. This meant, in other terms, varying its frequency with time, generating a dynamic OAM pulse.

Up to now, studies had been able to use HHG processes to drive spatially chirped pulses or angularly chirped pulses, but not azimuthal chirped time-varying OAM pulses. Thus, the results of this study give rise to a completely new form of light. They open a new field of applications in optical communications, microscopy, quantum optics, and microparticle manipulation. This new class of dynamic-OAM beams might be useful for manipulating the fastest magnetic, topological, molecular, and quantum excitations on attosecond time and nanometer spatial scales.