An experiment proposed at Griffith University and performed at the University of Science and Technology of China (USTC) has shown that quantum uncertainty can be enforced in a strange, non-local way, even with just a single particle.

The finding relates to a double-slit apparatus, which is used to demonstrate interference of the wave-function which is associated with every quantum particle.

The wave can go through two slits at once, and leads to a wavy pattern, called an interference pattern, in the probability of where the particle might be detected long after it has passed through the slits.

“This pattern is characteristic of its going through both slits rather than one or the other,” said Griffith University’s Professor Howard Wiseman. 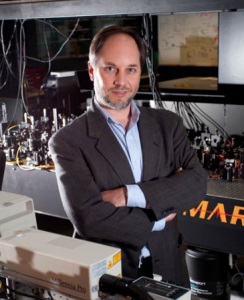 “Heisenberg, one of the founders of quantum theory, said that any which-slit measurement, to tell which slit the particle went through, would necessarily disturb its velocity, destroying the interference pattern.”

However, in this new experiment, published in Science Advances, the researchers realised a which-slit measurement that did not disturb the velocity of the particle as it went through the measurement apparatus.

“This seems to contradict Heisenberg, but what we showed is that the velocity still gets disturbed later on, long after the particles have left the slits behind,” Prof Wiseman said.

The theoretical approach adopted in the experiment was based on the Bohmian theory of quantum mechanics. It was Prof Wiseman, Director of Griffith’s Centre for Quantum Dynamics, who showed that this theory could be experimentally investigated in an influential paper from 2007.

This theory combines wave and particle aspects in quantum mechanics be postulating that the motion of a particle is choreographed by the wave function.

By reconstructing the Bohmian trajectories of single photons, the team experimentally obtained the distribution of velocity change.

“In the experiment, the velocity disturbance happens gradually, up to five metres away from where the which-slit measurement was performed,” Prof Wiseman said.

“Moreover, the amount of this non-local velocity disturbance was measured to be just as big as Heisenberg said it should be, given the necessary accuracy of the which-slit measurement.”

Prof Wiseman said the experiment highlighted that there was more to learn about quantum uncertainty, even in such classic set-ups as measuring which slit a particle goes through in a double-slit experiment.

The research ‘Observing momentum disturbance in double-slit which-way measurements’ has been published in Sciences Advances.