Mexican scientists have developed a theoretical way to manipulate heat transfer at a nanometric scale. 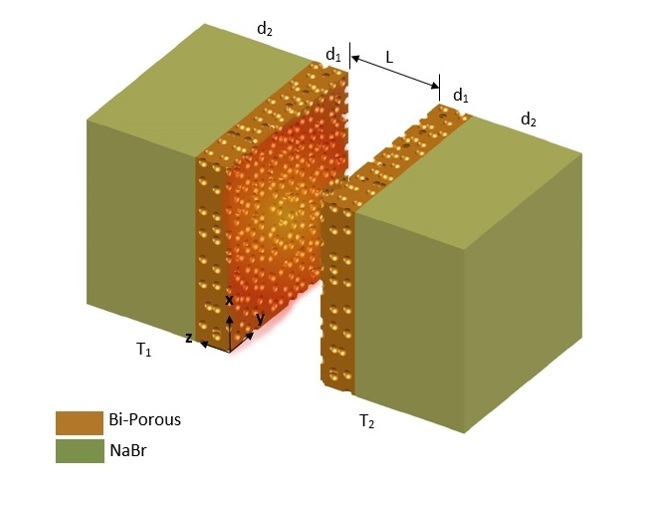 Mexican scientists have developed a theoretical way to manipulate heat transfer at a nanometric scale.

Researchers from the Institute of Physics, at the National University of Mexico (UNAM), managed to predict the possibility of suppressing almost completely and in an eligible spectral range a type of heat transfer known as near-field radiative heat transfer (NFRHT).

Unlike other types of heat transfer such as conduction or convection, NFRHT between two bodies at nanometer distances and at different temperatures is mediated by electromagnetic waves.

This transfer of radiative heat has two regimes: on the one hand, when the two media are separated by a distance larger than the thermal wavelength, NFRHT is dominated by propagating modes, while at smaller distances evanescent modes dominate, increasing the heat flow.

In order to manipulate this type of heat transfer, the researchers focused on the second case, by designing a nanocavities.

"Micro and nanocavities are structures designed to confine an electromagnetic wave of a certain frequency and make it resonate; they are usually designed to have a size comparable to the wavelength of light or even smaller, and are made of semi-reflective surfaces that enhance the resonance effect, " said Dr. Giuseppe Pirruccio.

The UNAM team chose a specific frequency range and designed a nanocavity with the ideal materials for that range: a polaritonic material coated with a metallic layer. "The goal of using this combination is that we can induce a strong coupling between the surface plasmon modes in the metal and the surface phonons in the dielectric material," said Pirruccio.

It is important to induce a strong coupling between the materials because it allows the creation of a new system with combined properties from the original materials. In this case, the team showed that the new coupled entity is capable of resonantly increase the heat transfer in certain spectral regions, suppress it almost completely in others and even lead to the opening of a thermal band gap. It is worth noting that the results obtained are general and they can be applied to any wavelength region by properly selecting the materials.

They concluded that the plasmon-phonon coupling is responsible for the opening of a controllable thermal band gap.

"It's basically a thermal filter", said Pirruccio. He said a possible future application may be in nanoelectronics: "If we want to prevent heat to damage the performance of our devices due to some frequency that overheats the system, it is enough to identify the specific frequency and it will be possible to design a thermal filter that suppresses that heat transfer".