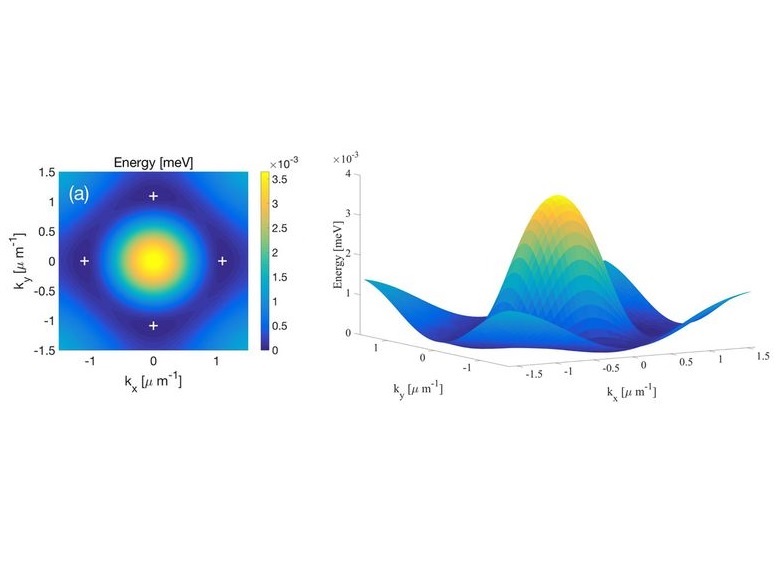 Plot of polaritons' energy dispersion vs momentum in a semiconductor microcavity, seen from above (left) and the side (right). Minimal energy locations, called valleys, are shown with white crosses.

Everything we experience is made of light and matter. And the interaction between the two can bring about fascinating effects. For example, it can result in the formation of special quasiparticles, called polaritons, which are a combination of light and matter. A team at the Center for Theoretical Physics of Complex Systems, within the Institute for Basic Science (IBS), modeled the behavior of polaritons in microcavities, nanostructures made of a semiconductor material sandwiched between special mirrors (Bragg mirrors). Published in Scientific Reports, this research brings new ideas to the emerging valleytronics field.

Emerging from the coupling of light (photons) and matter (bound state of electrons and holes known as excitons), polaritons have characteristics of each. They are formed when a light beam of a certain frequency bounces back and forth inside microcavities, causing the rapid interconversion between light and matter and resulting in polaritons with a short lifetime. "You can imagine these quasiparticles as waves that you make in water, they move together harmoniously, but they do not last very long. The short lifetime of polaritons in this system is due to the properties of the photons," explains Mr Meng Sun, first author of the study.

Researchers are studying polaritons in microcavities to understand how their characteristics could be exploited to outperform the present semiconductor technologies. Modern optoelectronics read, process, and store information by controlling the flow of particles, but looking for new more efficient alternatives, other parameters, like the so-called 'valleys' could be considered. Valleys can be visualized by plotting the energy of the polaritons to their momentum. Valleytronics aims to control the properties of the valleys in some materials, like transition metal dichalcogenides (TMDCs), indium gallium aluminum arsenide (InGaAlAs), and graphene.

Being able to manipulate their features would lead to tunable valleys with two clearly different states, corresponding for example to 1 bit and 0 bit, like on-off states in computing and digital communications. A way to distinguish valleys with the same energy level is to obtain valleys with different polarization, so that electrons (or polaritons) would preferentially occupy one valley over the others. IBS scientists have generated a theoretical model for valley polarization that could be useful for valleytronics.

Although polaritons are formed by the coupling of photons and excitons, the research team modeled the two components independently. "Modeling potential profiles of photons and excitons separately is the key to find where they overlap, and then determine the minimal energy positions where valleys occur," points out Sun.

A crucial feature of this system is that polaritons can inherit some properties, like polarization. Valleys with different polarization form spontaneously when the splitting of the transverse (i.e. perpendicular) electronic and magnetic modes of the light beam is taken into consideration (TE-TM splitting).

Since this theoretical model predicts that valleys with opposite polarization can be distinguished and tuned, in principle, different valleys could be selectively excited by a polarized laser light, leading to a possible application in valleytronics. 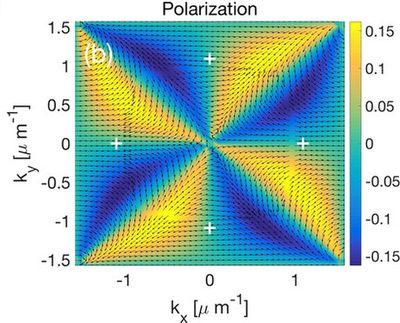