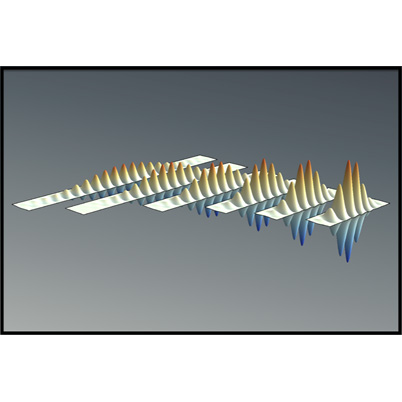 Developing quantum information networks is of uttermost importance in quantum information science. Information is exchanged, transmitted in these networks through material quantum nodes via the transmission of quantum light, that is, single photons. Because the quantum nodes may be composed of different quantum systems with different properties and capabilities, it is important to be able to precisely tailor the shape of the single photons to achieve a strong interaction between the various nodes. Previous approaches have offered a limited tuning range of the photon duration of at most one order of magnitude.

Now ICFO researchers Pau Farrera, Boris Albrecht and Dr. Georg Heinze in the group led by Prof. Hugues de Riedmatten, in collaboration with the theory group of Prof Nicolas Sangouard at the University of Basel, report in Nature Communications a heralded single photon source with controllable emission time based on a cold atomic ensemble, which can generate photons with arbitrary waveforms and temporal durations varying over three orders of magnitude.

The photon source is based on a quantum memory using a laser cooled Rubidium atom cloud. By tailoring the read-out optical pulse, the researchers managed to generate single photons with highly tunable waveform profiles, with durations ranging from around 10ns to 10us. The latter corresponds to a single photon of 3 km length in free space. Since the photons are close to be Fourier transformed limited, this represents one of the single photon with the narrowest frequency bandwidth ever created.

They also demonstrated the flexibility of the scheme by creating photons with a non-standard wave-shape, which are useful for quantum information tasks. This included photons with a rising exponential profile, which has been shown to be an ideal profile to interact with several atomic systems, and the generation of a single photon delocalized between two time-intervals, which can be used as a time-bin qubit for quantum communication.