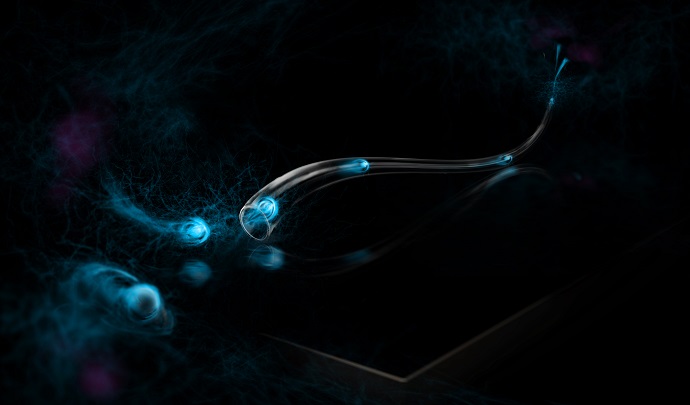 Scientists at Aalto University, Finland, have made a breakthrough in physics. They succeeded in transporting heat maximally effectively ten thousand times further than ever before. The discovery may lead to a giant leap in the development of quantum computers.

Heat conduction is a fundamental physical phenomenon utilized, for example, in clothing, housing, car industry, and electronics. Thus our day-to-day life is inevitably affected by major shocks in this field. The research group, led by quantum physicist Mikko Möttönen has now made one of these groundbreaking discoveries. This new invention revolutionizes quantum-limited heat conduction which means as efficient heat transport as possible from point A to point B. This is great news especially for the developers of quantum computers.

Quantum technology is still a developing research field, but its most promising application is the super-efficient quantum computer. In the future, it can solve problems that a normal computer can never crack. The efficient operation of a quantum computer requires that it can be cooled down efficiently. At the same time, a quantum computer is prone to errors due to external noise.

Möttönen’s innovation may be utilized in cooling quantum processors very efficiently and so cleverly that the operation of the computer is not disturbed.

”Our research started already in 2011 and advanced little by little. It feels really great to achieve a fundamental scientific discovery that has real practical applications”, Professor Mikko Möttönen rejoices. 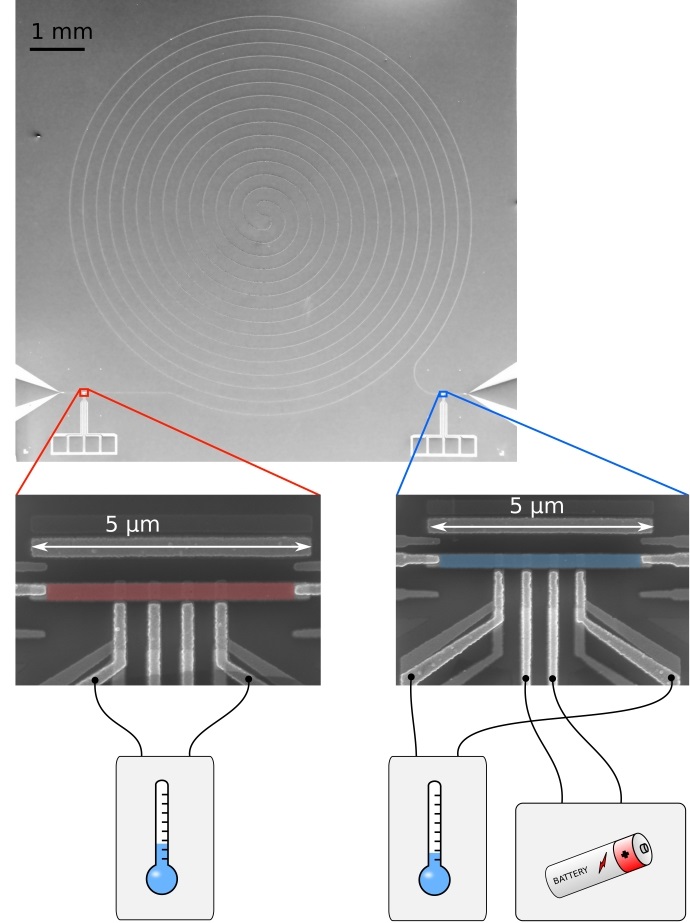 Device structure and simplified measurement scheme. A superconducting meandering transmission line on a silicon chip is terminated at both ends by micron-sized resistors. A pair of tunnel junctions at each resistor is used to measure the temperatures of their conduction electrons. The temperature drop at the left resistor due to active cooling of the right resistor is used to extract the thermal conductance between the two resistors. This quantum-limited heat conduction arises from the exchange of microwave photons flying in the transmission line.
Credit: Matti Partanen.

Atomic-force microscope image of one of the resistors in the device used to demonstrate quantum-limited heat conduction over macroscopic distances. Note that there are excess inactive copies of some of the structures owing to the employed fabrication methods.
Credit: Matti Partanen.

Important ideas
In the QCD Labs in Finland, Möttönen’s research group succeeded in measuring quantum-limited heat transport over distances up to a meter. A meter doesn’t sound very long at first, but previously scientists have been able to measure such heat transport only up to distances comparable to the thickness of a human hair.

“For computer processors, a meter is an extremely long distance. Nobody wants to build a larger processor than that”, stresses Möttönen.

The discovery is so important, that it will be published on February 1st, 2016 in Nature Physics which is the most prestigious scientific journal in physics.

The key idea in their research was to use photons to transfer the heat. Photons are particles that, for example, form the visible light. Previously scientists have used, for example, electrons as the heat carriers.

”We know that photons can transport heat over long distances. In fact, they bring the heat of the Sun to the Earth”, Möttönen says.

The team came up with the idea to use a transmission line with no electrical resistance to transport the photons. This superconducting line was built on a silicon chip with the size of a square centimeter. Tiny resistors were placed at the ends of the transmission line. The research results were obtained by measuring induced changes in the temperatures of these resistors.

New physics
The Quantum Computing and Devices (QCD) group led by Prof. Möttönen was able to show that quantum-limited heat conduction is possible over long distances. The result enables the application of this phenomenon outside laboratories. Thus the device built by the team fundamentally changes how heat conduction can be utilized in practice. 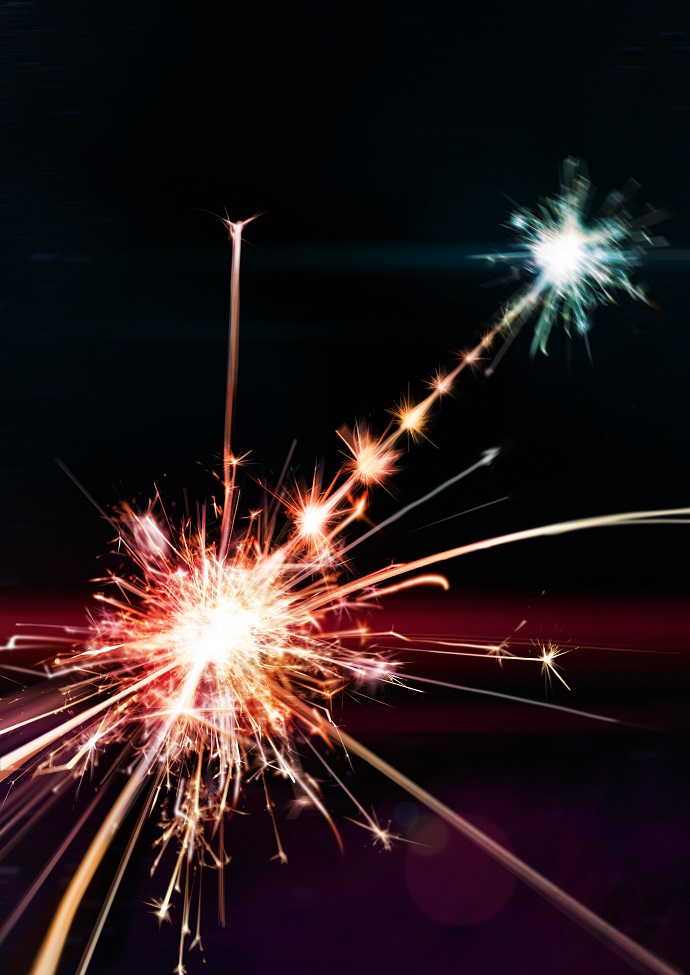 Möttönen’s previous research results have also been praised in the scientific community as well as the media. He has published articles in top journals, such as Nature and Science. However, there is a reason why this new discovery feels even better than previous breakthroughs:
”The research has been fully carried out in my lab by my staff. This really makes me feel like I hit the jackpot”, Möttönen rejoices. 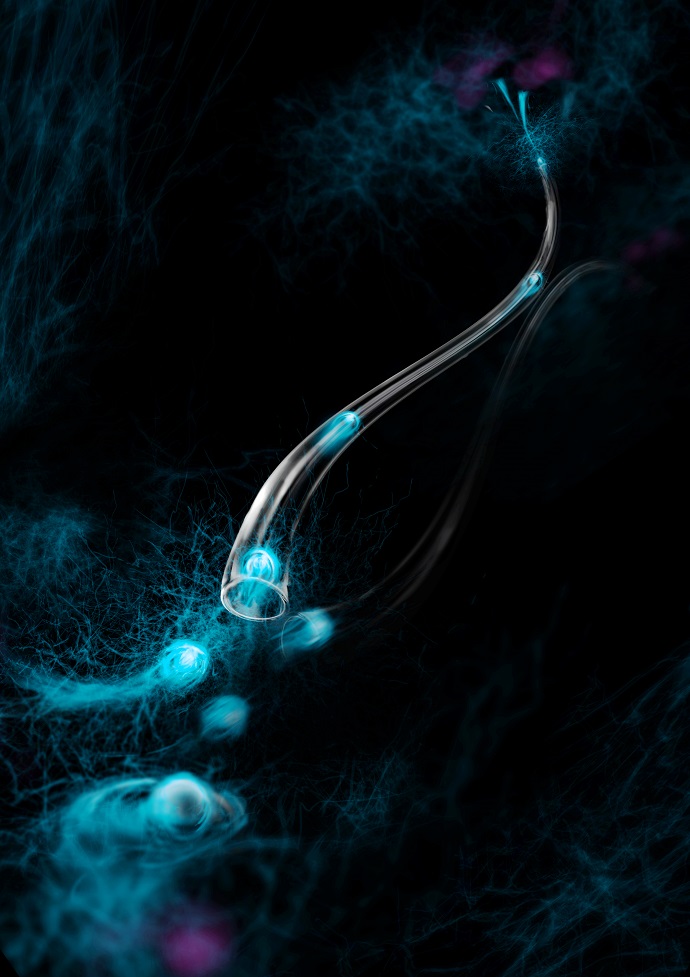 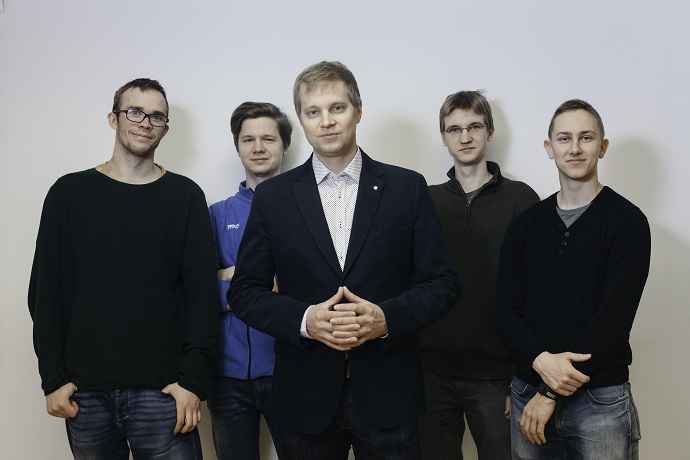