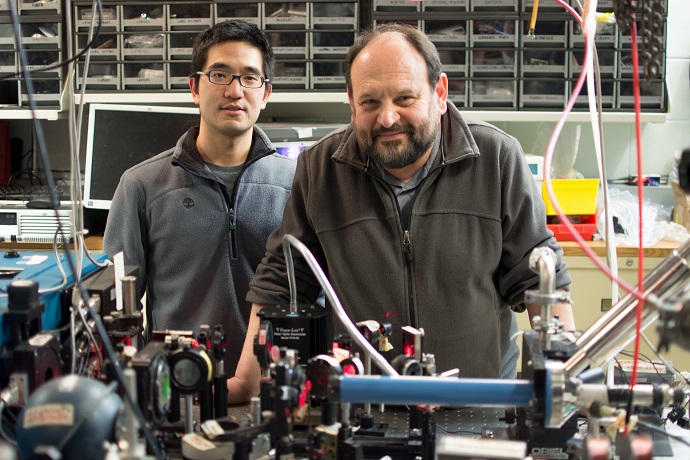 NEW BRUNSWICK, N.J. – A new explanation for a type of order, or symmetry, in an exotic material made with uranium may lead to enhanced computer displays and data storage systems, and more powerful superconducting magnets for medical imaging and levitating high-speed trains, according to a Rutgers-led team of research physicists.

The team’s findings are a major step toward explaining a puzzle that physicists worldwide have been struggling with for 30 years, when scientists first noticed a change in the material’s electrical and magnetic properties but were unable to describe it fully. This subtle change occurs when the material is cooled to 17.5 degrees above absolute zero or lower (a bone-chilling minus 428 degrees Fahrenheit).

“This ‘hidden order’ has been the subject of nearly a thousand scientific papers since it was first reported in 1985 at Leiden University in the Netherlands,” said Girsh Blumberg, professor in the Department of Physics and Astronomy in the School of Arts and Sciences.

Collaborators from Rutgers University, the Los Alamos National Laboratory in New Mexico, and Leiden University published their findings this week in the web-based journal Science Express, which features selected research papers in advance of their appearance in the journal Science. Blumberg and two Rutgers colleagues, graduate student Hsiang-Hsi Kung and professor Kristjan Haule, led the collaboration.

Changes in order are what make liquid crystals, magnetic materials and superconductors work and perform useful functions. While the Rutgers-led discovery won’t transform high-tech products overnight, this kind of knowledge is vital to ongoing advances in electronic technology.

“The Los Alamos collaborators produced a crystalline sample of the uranium, ruthenium and silicon compound with unprecedented purity, a breakthrough we needed to make progress in solving the puzzle of hidden order,” said Blumberg. Uranium is commonly known as an element in nuclear reactor fuel or weapons material, but in this case, physicists value it as a heavy metal with electrons that behave differently than those in common metals. 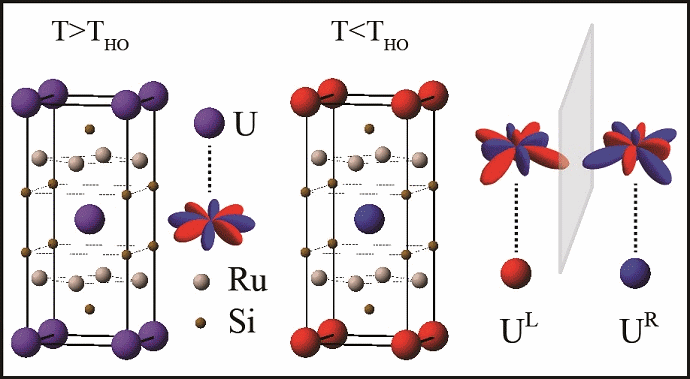 Under these cold conditions, the orbital patterns made by electrons in uranium atoms from adjacent crystal layers become mirror images of each other. Above the hidden order temperature, these electron orbitals are the same. The Rutgers researchers discovered this so-called “broken mirror symmetry” using instrumentation they developed – based on a principle known as Raman scattering – to distinguish the pattern of the mirror images in the electron orbitals.

“In this field, it’s rare to have such predictive power,” he said, noting that Gabriel Kotliar developed a computational technique that led to the prediction of the hidden order symmetry. Haule and Kotliar applied this technique to predict the changes in electron orbitals that Kung and Blumberg detected.

At still colder temperatures of 1.5 degrees above absolute zero, the material becomes superconducting – losing all resistance to the flow of electricity. While not practical for today’s products and systems that rely on superconductivity, the material provides new insights into ways that materials can become superconducting.

The hidden order puzzle has also been a focus of other Rutgers researchers. Two years ago, professors Premala Chandra and Piers Coleman, along with alumna Rebecca Flint, published another theoretical explanation of the phenomenon in the journal Nature.

The Leiden University collaborator, John Mydosh, is a member of the laboratory that discovered hidden order in 1985.

“The work of Blumberg and his team is an important and viable step towards the understanding of hidden order,” Mydosh said. “We are well on our way after 30 years towards the final solution.”

Working with Kung, Blumberg and Haule at Rutgers were Verner Thorsmølle and Weilu Zhang. The Los Alamos National Laboratory collaborators are Ryan Baumbach and Eric Bauer.

The research was funded by the National Science Foundation and theU.S. Department of Energy’s Office of Basic Energy Sciences, Division of Materials Sciences and Engineering.