Researchers at Aalto University and Amherst College, USA, have observed a point-like monopole in a quantum field itself for the first time. 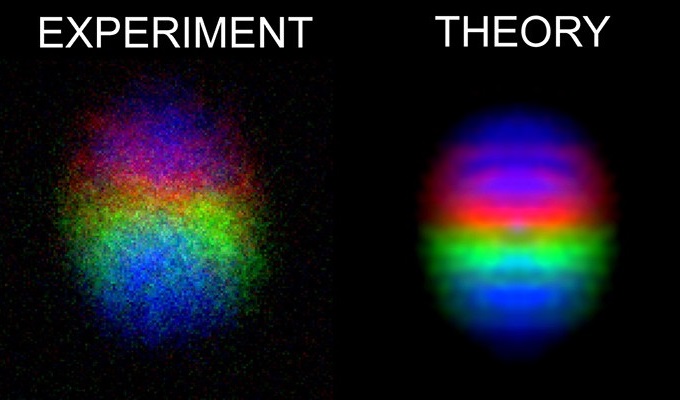 Image of an experimentally created Bose–Einstein condensate containing the monopole (left) and the corresponding theoretical prediction (right). Brighter area has higher particle density and the different colors denote the internal spin state of the atoms. The monopole is located in the center of the condensate.

This discovery connects to important characteristics of the elusive monopole magnet. The results were just published in Science magazine.

The researchers performed an experiment in which they manipulated a gas of rubidium atoms prepared in a nonmagnetic state near absolute zero temperature. Under these extreme conditions they were able to create a monopole in the quantum-mechanical field that describes the gas.

‘In this nonmagnetic state, a structure was created in the field describing the gas, resembling the magnetic monopole particle as described in grand unified theories of particle physics. Previously, we have used the gas to detect a monopole within a so-called synthetic magnetic field, but there has been no monopole in the quantum field describing the gas itself. Now we have finally witnessed the quantum-mechanical monopole!’, enthuses Dr. Mikko Möttönen, Aalto University.

‘In the nonmagnetic state of the gas, no quantum whirlpools or monopoles are created in the synthetic magnetic field. However, quantum-mechanical magnetic order prevails in the sample, and we were able to manipulate this with adjustments to an externally applied magnetic field’, Möttönen continues.

‘The control of those magnetic fields must be stable to a small fraction of the size of the Earth's magnetic field’, adds Prof. David Hall, Amherst College. 'The main experimental challenge we faced is to prepare the ultracold gas under highly sensitive conditions, in which field fluctuations due to the motion of metal objects or power line variations can make observation of the monopoles difficult.', Hall continues.

The result is a remarkable step forward in quantum research. It is important to understand the structure of monopoles and other topological entities, in part because they appear in the models describing the early universe and affect the properties of many different materials, such as metals.

The discovery of a magnetic monopole particle is still in the future. This new result establishes that the structure of a quantum mechanical monopole does appear in nature, and therefore it further supports the possibility that magnetic monopoles exist.

See also the previous work of the team on a monopole in a synthetic classical-like field:
“Observation of Dirac Monopoles in a Synthetic Magnetic Field”, Nature 505, 657 (2014).