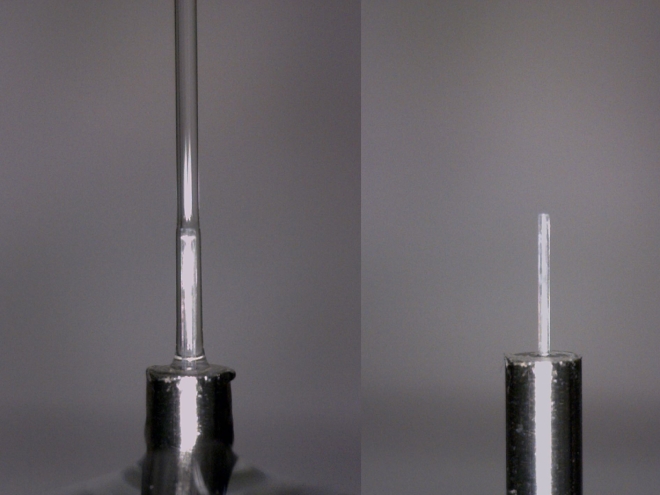 A close-up of the liquid jet sensor with the liquid jet (left) and without it (right). The jet of water is less than a millimeter in diameter. Credit: Gianluca Persichetti, IREA – CNR

WASHINGTON, Oct. 3, 2013—When you shine ultraviolet light (UV) through water polluted with certain organic chemicals and bacteria, the contaminants measurably absorb the UV light and then re-emit it as visible light. Many of today’s more advanced devices for testing water are built to make use of this fluorescent property of pollutants; but the walls of the channels through which the water travels in these devices can produce background noise that makes it difficult to get a clear reading. Reported today, in The Optical Society’s (OSA) open-access journal, Optics Express, researchers in Italy have developed a pollutant detector that forgoes the channels in favor of a narrow stream of water unconfined by tubes or pipes. The naked jet of water doubles as both the sample and the collection equipment, providing a simple, cheap, and portable new tool to analyze liquids developed in the framework of the research project ACQUASENSE. 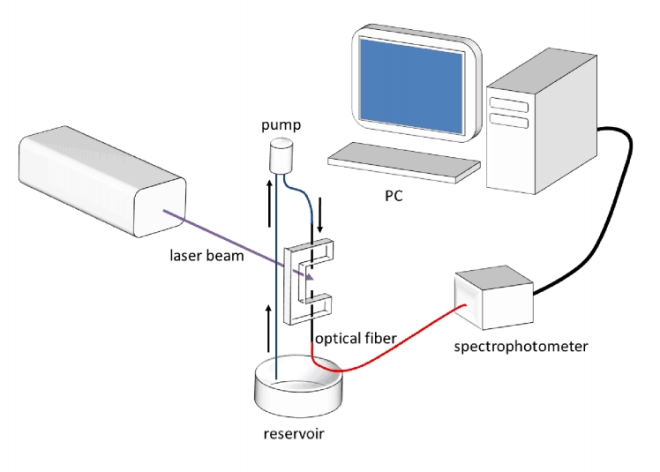 A schematic illustration of the technique used to detect contaminants. A laser beam is directed perpendicularly into the flow of water. Fluorescent light from contaminants in the water is carried away to be detected and analyzed. Credit: Gianluca Persichetti, IREA – CNR

"The innovative aspect of this sensor is related to the simple and tricky way used to collect the light—a water stream," says Gianluca Persichetti of the Institute for Electromagnetic Sensing of the Environment (IREA), National Research Council, (CNR) in Italy.

Typical microfluidic detectors rely on narrow channels to hold and control the water samples with their fluorescing organic compounds. But the laser light that illuminates bacteria and chemicals in the water also shines on the channel walls, where it scatters and obscures the distinction between the fluorescing contaminants and their background. Wear and tear on the walls also weakens the reliability of measurements made using these instruments.

To get around the problems caused by the channel walls, Persichetti and his colleagues of the group led by Romeo Bernini decided simply to do away with them. In their new technique, they pump the water sample through a nozzle at 1.4 meters per second, producing a narrow stream that is less than a millimeter in diameter. Then they shine a UV laser onto the exposed jet of water. The fluorescent light produced by the pollutants and bacteria bounces around and is trapped inside the jet, which acts as a waveguide, a tunnel that channels light through the stream.

The laser light itself is a source of a background noise that can cloud the signal, Perisichetti said, so the researchers minimize the amount of laser light that gets trapped in the jet by firing the laser beam at an angle perpendicular to the stream of water.

After traveling a total distance of 16 millimeters—not much more than the width of your finger—the jet enters a small pipe that contains an optical fiber, which collects the fluorescent light signals. The water is pumped back to recirculate through the nozzle, allowing the instrument to analyze even a small sample for an extended period of time.

The researchers tested their device with varying amounts of some of the main pollutants of ground water – soil contaminants such as benzene, toluene, and xylene (together called BTX), and polycyclic aromatic hydrocarbons (PAH), which are hazardous, carcinogenic chemicals found in tar and petroleum. Persichetti and his colleagues found that the device was extremely sensitive: it could detect pollutant levels even lower than those allowed by the Environmental Protection Agency (EPA). The instrument could also sense Bacillus subtillus, a harmless bacterium similar to the one that causes anthrax. 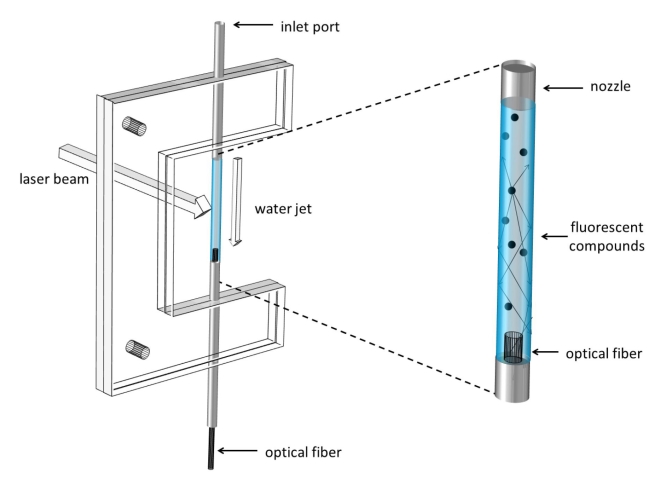 A schematic illustration of the sensor itself. Credit: Gianluca Persichetti, IREA – CNR

The current device is fitted with an instrument called a spectrophotometer, which can measure the optical signatures of specific chemicals. To make the device even cheaper and smaller for future commercialization in water-safety testing, the researchers plan to replace the laser with a light-emitting diode (LED) and to replace the spectrophotometer with a simpler and less expensive set-up that would include a filter to remove unwanted background light, and a photodiode, which converts light into electricity, to detect the signal. In addition to water-safety applications, Persichetti says, future instruments can be designed with more sophisticated sensors to distinguish between a variety of chemicals or bacterial cells for biological and medical research.

Optics Express reports on new developments in all fields of optical science and technology every two weeks. The journal provides rapid publication of original, peer-reviewed papers. It is published by the Optical Society and edited by Andrew M. Weiner of Purdue University. Optics Express is an open-access journal and is available at no cost to readers online atwww.OpticsInfoBase.org/OE.

Founded in 1916, The Optical Society (OSA) is the leading professional society for scientists, engineers, students and business leaders who fuel discoveries, shape real-world applications and accelerate achievements in the science of light.  Through world-renowned publications, meetings and membership programs, OSA provides quality research, inspired interactions and dedicated resources for its extensive global network of professionals in optics and photonics. For more information, visit www.osa.org.