How do you feel when technology you saw in a movie is made into reality? Collaboration between the electrical engineering and textile industries has made TVs or smartphone screens displaying on clothing a reality.

A research team led by Professor Kyung Cheol Choi at the School of Electrical Engineering presented wearable displays for various applications including fashion, IT, and healthcare. Integrating OLED (organic light-emitting diode) into fabrics, the team developed the most highly flexible and reliable technology for wearable displays in the world.

Recently, information displays have become increasingly important as they construct the external part of smart devices for the next generation. As world trends are focusing on the Internet of Things (IoTs) and wearable technology, the team drew a lot of attention by making great progress towards commercializing clothing-shaped 'wearable displays'.

The research for realizing displays on clothing gained considerable attention from academia as well as industry when research on luminescence formed in fabrics was introduced in 2011; however, there was no technology for commercializing it due to its surface roughness and flexibility.

Because of this technical limitation, clothing-shaped wearable displays were thought to be unreachable technology. However, the KAIST team recently succeeded in developing the world's most highly efficient, light-emitting clothes that can be commercialized.

The research team used two different approaches, fabric-type and fiber-type, in order to realize clothing-shaped wearable displays. In 2015, the team successfully laminated a thin planarization sheet thermally onto fabric to form a surface that is compatible with the OLEDs approximately 200 hundred nanometers thick. Also, the team reported their research outcomes on enhancing the reliability of operating fiber-based OLEDs. In 2016, the team introduced a dip-coating method, capable of uniformly depositing layers, to develop polymer light-emitting diodes, which show high luminance even on thin fabric.

Based on the research performance in 2015 and 2016, Ph.D. candidate Seungyeop Choi took the lead in the research team and succeeded in realizing fabric-based OLEDs, showing high luminance and efficiency while maintaining the flexibility of the fabric.

The long-term reliability of this wearable device that has the world's best electrical and optical characteristics was verified through their self-developed, organic and inorganic encapsulation technology. According to the team, their wearable device facilitates the operation of OLEDs even at a bending radius of 2mm. 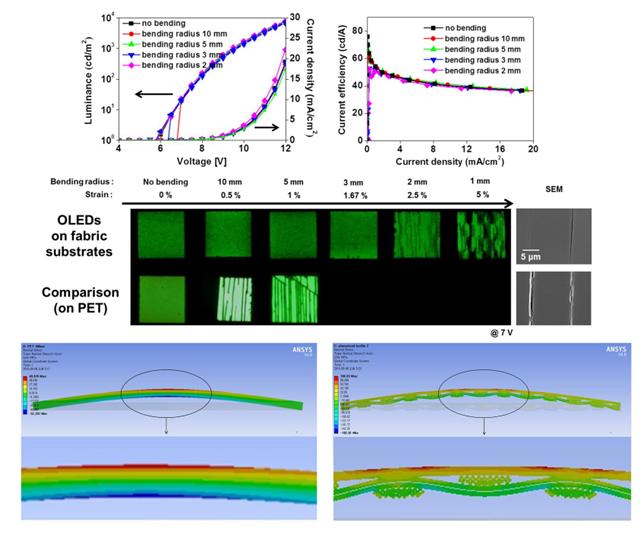 Photos of Various Tests on OLEDs:
i) Current-voltage-luminance and efficiency of the highly flexible, fabric-based OLEDs
ii) Image of OLEDs after repetitive bending tests
iii) Verification of flexibility through mechanical simulation
CREDIT: KAIST

According to Choi, "Having wavy structures and empty spaces, fiber plays a significant role in lowering the mechanical stress on the OLEDs."

"Screen displayed on our daily clothing is no longer a future technology," said Professor Choi. "Light-emitting clothes will have considerable influence on not only the e-textile industry but also the automobile and healthcare industries."

Moreover, the research team remarked, "It means a lot to realize clothing-shaped OLEDs that have the world's best luminance and efficiency. It is the most flexible fabric-based light-emitting device among those reported. Moreover, noting that this research carried out an in-depth analysis of the mechanical characteristics of the clothing-spared, light-emitting device, the research performance will become a guideline for developing the fabric-based electronics industry."

This research was funded by the Ministry of Trade, Industry and Energy and collaborated with KOLON Glotech, INC. The research performance was published in Scientific Reports in July.