Diamonds are a lab’s best friend 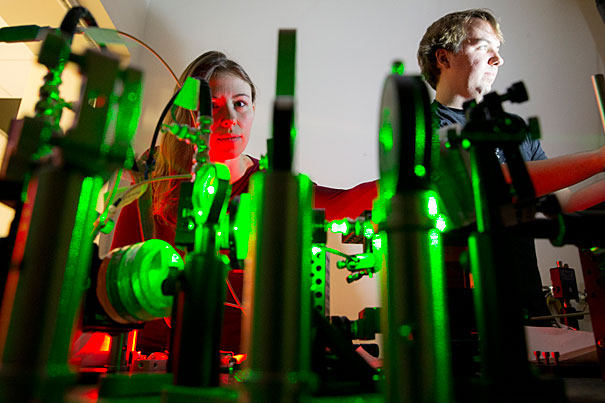 PH.D. candidates Jenny Schloss (left) and Matthew Turner are co-authors of a recent paper on using nitrogen vacancy centers — atomic-scale impurities in diamond — to track neural activity. “We want to understand the brain from the single-neuron level all the way up, so we envision that this could become a tool useful both in biophysics labs and in medical studies,” said Schloss. Rose Lincoln/Harvard Staff Photographer

It’s one of the purest and most versatile materials in the world, with uses in everything from jewelry to industrial abrasives to quantum science. But a group of Harvard scientists has uncovered a new use for diamonds: tracking neural signals in the brain.

Using atomic-scale quantum defects in diamonds known as nitrogen-vacancy (NV) centers to detect the magnetic field generated by neural signals, scientists working in the lab of Ronald Walsworth, a faculty member in Harvard’s Center for Brain Science and Physics Department, demonstrated a noninvasive technique that can image the activity of neurons.

The work was described in a recent paper in the Proceedings of the National Academy of Sciences, and was performed in collaboration with Harvard faculty members Mikhail (Misha) Lukin and Hongkun Park.

“The idea of using NV centers for sensing neuron magnetic fields began with the initial work of Ron Walsworth and Misha Lukin about 10 years ago, but for a long time our back-of-the-envelope calculations made it seem that the fields would be too small to detect, and the technology wasn’t there yet,” said Jennifer Schloss, a Ph.D. student and co-author of the study.

“This paper is really the first step to show that measuring magnetic fields from individual neurons can be done in a scalable way,” said Ph.D. student and fellow co-author Matthew Turner. “We wanted to be able to model the signal characteristics, and say, based on theory, ‘This is what we expect to see.’ Our experimental results were consistent with these expectations. This predictive ability is important for understanding more complicated neuronal networks.”

At the heart of the system developed by Schloss and Turner, together with postdoctoral scientist John Barry, is a tiny — just 4-by-4 millimeters square and half a millimeter thick — wafer of diamond impregnated with trillions of NV centers.

The system works, Schloss and Turner explained, because the magnetic fields generated by signals traveling in a neuron interact with the electrons in the NV centers, subtly changing their quantum “spin” state. The diamond wafer is bathed in microwaves, which put the NV electrons in a mixture of two spin states. A neuron magnetic field then causes a change in the fraction of spins in one of the two states. Using a laser constrained to the diamond, the researchers can detect this fraction, reading out the neural signal as an optical image, without light entering the biological sample.

In addition to demonstrating that the system works for dissected neurons, Schloss, Turner, and Barry showed that NV sensors could be used to sense neural activity in live, intact marine worms.

“We realized we could just put the whole animal on the sensor and still detect the signal, so it’s completely noninvasive,” Turner said. “That’s one reason using magnetic fields offers an advantage over other methods. If you measure voltage- or light-based signals in traditional ways, biological tissue can distort those signals. With magnetic fields, though the signal gets smaller with stand-off distance, the information is preserved.”

Schloss, Turner, and Barry were also able to show that the neural signals traveled more slowly from the worm’s tail to its head than from head to tail, and their magnetic field measurements matched predictions of this difference in conduction velocity.

While the study proves that NV centers can be used to detect neural signals, Turner said the initial experiments were designed to tackle the most accessible approach to the problem, using robust neurons that produce especially large magnetic fields. The team is already working to further refine the system, with an eye toward improving its sensitivity and pursuing applications to frontier problems in neuroscience. To sense signals from smaller mammalian neurons, Schloss explained, they intend to implement a pulsed magnetometry scheme to realize up to 300 times better sensitivity per volume. The next step, said Turner, is implementing a high-resolution imaging system in hopes of producing real-time, optical images of neurons as they fire.

“We’re looking at imaging networks of neurons over long durations, up to days,” said Schloss. “We hope to use this to understand not just the physical connectivity between neurons, but the functional connectivity — how the signals actually propagate to inform how neural circuits operate over the long term.”

“No tool that exists today can tell us everything we want to know about neuronal activity or be applied to all systems of interest,” Turner said. “This quantum diamond technology lays out a new direction for addressing some of these challenges. Imaging neuron magnetic fields is a largely unexplored area due to previous technological limitations.”

The hope, Schloss said, is that the tool might one day find a home in the labs of biomedical researchers or anyone interested in understanding brain activity.

“We want to understand the brain from the single-neuron level all the way up, so we envision that this could become a tool useful both in biophysics labs and in medical studies,” she said. “It’s noninvasive and fast, and the optical readout could allow for a variety of applications, from studying neurodegenerative diseases to monitoring drug delivery in real time.”