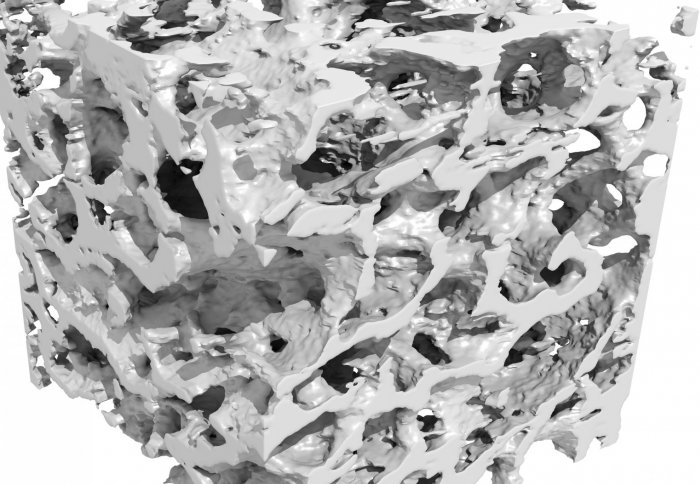 The technology is at an early stage but the researchers believe that with further development, it could ultimately enable doctors to make an early diagnosis of bone problems such as osteoporosis, without needing to take a biopsy. It has been developed in collaboration with the lasers team at the Science and Technology Facilities Council (STFC),

Osteoporosis is a condition that weakens bones, making them fragile and more likely to break. According to the NHS more than 300,000 people receive hospital treatment every year for fragility fractures (fractures that occur from standing height or less) as a result of osteoporosis so this technology has the potential to improve the lives of many people.

The x-rays were produced using a laser wakefield accelerator – a compact type of particle accelerator developed at Imperial.

For the first time, the researchers identified and tested a medical application for this type of accelerator by demonstrating that x-rays, produced as the electrons accelerate, can be used to create high-resolution images of dense material such as bones.

Their results, published today in Scientific Reports, show that it is possible to use their x-ray source to produce three-dimensional images of bone samples at resolutions of around 50 microns. This would allow clinicians to spot features within the bone that were finer than a human hair – at around 100 microns thick.

The scientists are now working on refining their technique and exploring how the technology could be adapted for use in a hospital. In particular, work is underway to also miniaturise the laser system that underpins this work so that the whole system can be made to fit into a hospital imaging department.

“Wakefield accelerators have been developed with the idea that they could make the accelerators used in high-energy physics experiments, such as at CERN, much more compact and thus cheaper. However, those same benefits could see wakefield accelerators being used in other applications of accelerators, such as in generating high quality beams of x-rays,” says research team leader Professor Zulfikar Najmudin, of the John Adams Institute for Accelerator Science in the Physics Department at Imperial.

The team have been developing their technique at STFC’s Central Laser Facility, based at the Rutherford Appleton Laboratory in Oxfordshire.

“This demonstration of high resolution x-ray imaging builds on many years of research conducted using our world-leading systems – in this case the Gemini laser – and brings together experienced researchers from different fields”, says STFC’s  Dr Dan Symes, one of the research team.

In a laser wakefield accelerator, the laser is fired into a helium gas cell to create a plasma. This means that electrons in the gas are shaken free from their parent atoms to make a ‘soup’ of charged particles – the plasma. The intense pressure of the high power laser then generates a cavity in the plasma that can accelerate some of these electrons almost to the speed of light in distances of a centimetre or less. A focused beam of energetic electrons exits the plasma which can then be used for physics experiments, such as the generation of beams of anti-matter.

Another consequence of this process, however, is that the electrons naturally oscillate in the cavity in which they are accelerated and as they do so, they emit a beam of high-energy x-ray particles. Since the cavity from which the x-rays are emitted is also compact, the size of the x-ray source is also remarkably small, about the order of one micron. This enables high-resolution imaging simply by propagating the x-rays through a sample.

“In this study, we’ve shown that the laser technology has the potential to be adapted so that we can create x-rays that reveal unprecedented detail,” explains Jason Cole, lead author of the study, also from Imperial. “This kind of high-resolution x-ray would be extremely useful for identifying conditions such as osteoporosis. Conventional x-ray scanning cannot get the full picture, as early-stage bone cracks can be too fine to be picked up.”

The team used this beam to produce pictures of a small sample from the leg bone taken from an elderly patient who had had a hip replacement. By rotating the bone slightly after each picture, a full three-dimensional reconstruction of the sample was produced showing fine detail of the bone’s internal structure.

To be able to produce this kind of detailed study of bones presently requires expensive equipment and the technology is not yet sufficiently refined to detect microfractures in bone, which can be an early indication of osteoporosis. Microfractures can be just 10 microns thick and currently can only be detected by taking a biopsy of the bone and sending the sample for specialist analysis by microtomography machines – a time consuming and expensive process.

“The internal structure of bone is surprisingly complicated – you need powerful x-rays to penetrate the material deeply enough to get a detailed image,” says Cole. “Our method was able to produce really detailed pictures that could be transformed into a 3D model of the sample.”

The team expects that, with refinement, their system could provide a practical alternative to microtomography.

“There is currently a lot of research being carried out into detecting microfractures,” explains Cole. “This method could match microtomography machines in terms of the resolution that could be achieved – and because laser technology is developing so rapidly, this could, eventually, become a viable technique for bone analysis in hospitals.”

The research was funded by the Engineering and Physical Sciences Research Council and the Science and Technology Facilities Council.