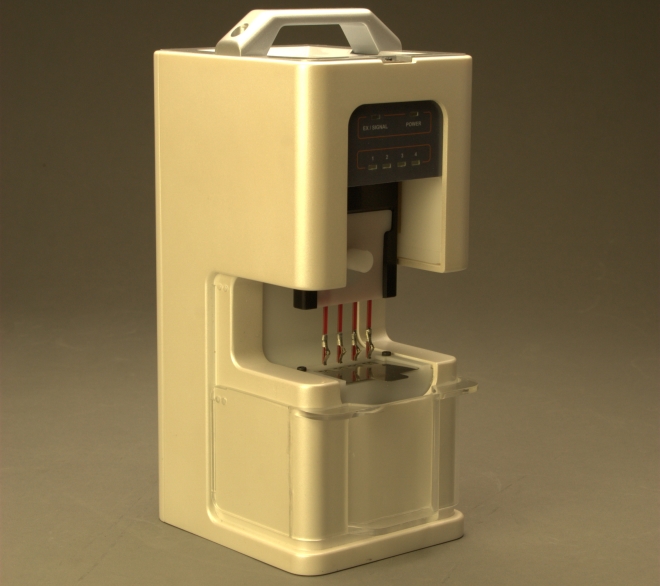 Take a swab of saliva from your mouth and within minutes your DNA could be ready for analysis and genome sequencing with the help of a new device.

University of Washington engineers and NanoFacture, a Bellevue, Wash., company, have created a device that can extract human DNA from fluid samples in a simpler, more efficient and environmentally friendly way than conventional methods.

The device will give hospitals and research labs a much easier way to separate DNA from human fluid samples, which will help with genome sequencing, disease diagnosis and forensic investigations.

“It’s very complex to extract DNA,” said Jae-Hyun Chung, a UW associate professor of mechanical engineering who led the research. “When you think of the current procedure, the equivalent is like collecting human hairs using a construction crane.”

This technology aims to clear those hurdles. The small, box-shaped kit now is ready for manufacturing, then eventual distribution to hospitals and clinics. NanoFacture, a UW spinout company, signed a contract with Korean manufacturer KNR Systems last month at a ceremony in Olympia, Wash.

The UW, led by Chung, spearheaded the research and invention of the technology, and still manages the intellectual property.

Separating DNA from bodily fluids is a cumbersome process that’s become a bottleneck as scientists make advances in genome sequencing, particularly for disease prevention and treatment. The market for DNA preparation alone is about $3 billion each year.

Conventional methods use a centrifuge to spin and separate DNA molecules or strain them from a fluid sample with a micro-filter, but these processes take 20 to 30 minutes to complete and can require excessive toxic chemicals.

UW engineers designed microscopic probes that dip into a fluid sample – saliva, sputum or blood – and apply an electric field within the liquid. That draws particles to concentrate around the surface of the tiny probe. Larger particles hit the tip and swerve away, but DNA-sized molecules stick to the probe and are trapped on the surface. It takes two or three minutes to separate and purify DNA using this technology.

“This simple process removes all the steps of conventional methods,” Chung said.

The hand-held device can clean four separate human fluid samples at once, but the technology can be scaled up to prepare 96 samples at a time, which is standard for large-scale handling. 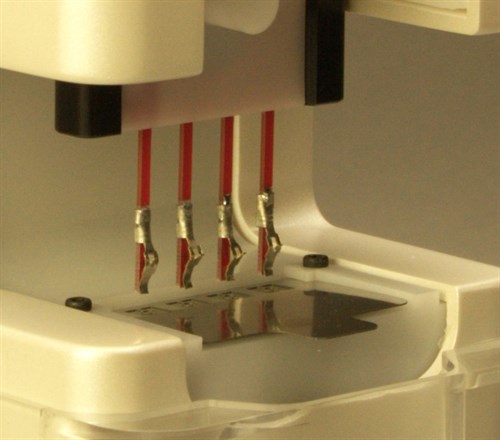 A close-up view of the portable device.
UW/NanoFacture/KNR

The tiny probes, called microtips and nanotips, were designed and built at the UW in a micro-fabrication facility where a technician can make up to 1 million tips in a year, which is key in proving that large-scale production is feasible, Chung said.

Engineers in Chung’s lab also have designed a pencil-sized device using the same probe technology that could be sent home with patients or distributed to those serving in the military overseas. Patients could swab their cheeks, collect a saliva sample, then process their DNA on the spot to send back to hospitals and labs for analysis.

This could be useful as efforts ramp up toward sequencing each person’s genome for disease prevention and treatment, Chung said.

The market for this device isn’t developed yet, but Chung’s team will be ready when it is. Meanwhile, the larger device is ready for commercialization, and its creators have started working with distributors.

A UW Center for Commercialization grant of $50,000 seeded initial research in 2008, and since then researchers have received about $2 million in funding from the National Science Foundation and the National Institutes of Health. Sang-gyeun Ahn, a UW assistant professor of industrial design, crafted the prototype.