Physicists have developed an efficient modem for the future quantum internet

Physicists at the Max Planck Institute of Quantum Optics have developed the basic technology for a new "quantum modem". It will allow users to connect to a future quantum internet that is based on the existing fibre optic network infrastructure. 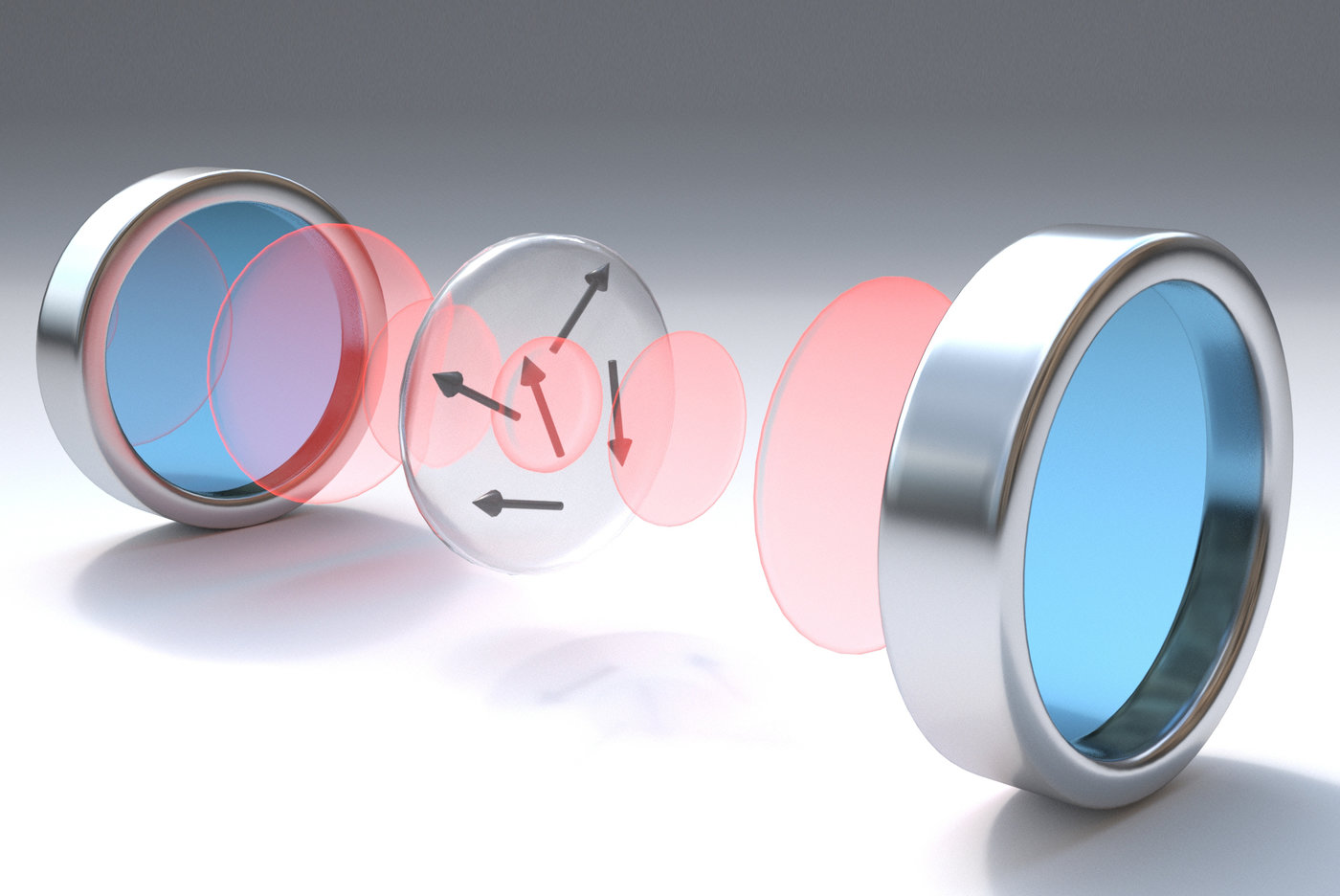 The Garching quantum modem: The crystal disk with the quantum bits of erbium atoms (arrows) is in the middle, the back and forth reflected infrared light is indicated by the red disks. Christoph Hohmann (MCQST)

The first quantum revolution brought about semiconductor electronics, the laser and finally the internet. The coming, second quantum revolution promises spy-proof communication, extremely precise quantum sensors and quantum computers for previously unsolvable computing tasks. But this revolution is still in its infancy. A central research object is the interface between local quantum devices and light quanta that enable the remote transmission of highly sensitive quantum information. The Otto-Hahn group "Quantum Networks" at the Max-Planck-Institute of Quantum Optics in Garching is researching such a "quantum modem". The team has now achieved a first breakthrough in a relatively simple but highly efficient technology that can be integrated into existing fibre optic networks. The work is published this week in "Physical Review X".

The Corona pandemic is a daily reminder of how important the internet has become. The World Wide Web, once a by-product of basic physical research, has radically changed our culture. Could a quantum internet become the next major innovation out of physics?

It is still too early to answer that question, but basic research is already working on the quantum internet. Many applications will be more specialised and less sensual than video conferencing, but the importance of absolutely spy-proof long-distance communication is understandable to everyone. "In the future, a quantum internet could be used to connect quantum computers located in different places," Andreas Reiserer says, "which would considerably increase their computing power!” The physicist heads the independent Otto-Hahn research group "Quantum Networks" at the Max-Planck-Institute of Quantum Optics in Garching.

A quantum internet is thus essentially about the global networking of new technologies that make a much more consequent use of quantum physics than ever before. However, this requires suitable interfaces for the extremely sensitive quantum information. This is an enormous technical challenge, which is why such interfaces are a central focus of fundamental research. They must ensure that stationary quantum bits - qubits for short - interact efficiently with "flying" qubits for long-distance communication without destroying the quantum information. Stationary qubits will be located in local devices, for example as the memory or processor of a quantum computer. Flying qubits are typically light quanta, photons, that transport the quantum information through the air, a vacuum of space or through fibre optic networks.

The "quantum modem" is designed to efficiently establish a connection between flying and stationary qubits. For this purpose, the team around doctoral student Benjamin Merkel has developed a new technology and has just demonstrated its basic functionality. Its crucial advantage is that it could be integrated into the existing telecommunications fibre-optic network. This would be the fastest way to advance a functioning long-distance networking of quantum technologies.

For this system to work, the photons sent or received by the modem as quantum information carriers must be matched precisely to the infrared wavelength of the laser light used for telecommunications. This means that the modem must have qubits at rest that can react precisely to these infrared photons with a quantum leap. Only in this way the sensitive quantum information can be transmitted directly between the qubits at rest and the flying qubits.

Extensive research by the Garching-based group showed that the element erbium is best suited for this purpose. Its Electrons can perform a perfectly matching quantum leap. Unfortunately, the erbium atoms are very reluctant to make this quantum leap. Therefore,  they must be fixated in anenvironment that forces them to react more quickly. To solve this problem, the erbium atoms and the infrared photons are locked up in a suitable space for as long as possible. "You can think of it as a party, which should stimulate the best possible communication between, let’s say, ten guests," Reiserer explains. The size of the space is crucial here. "In a football stadium the guests would get lost, a telephone box in turn would  be too small," the physicist continues, "but a living room would do just fine.”

The party, however, would quickly be over because the photons travel at the speed of light and are therefore highly volatile and always tempted to leave. This is why the Garching quantum modem uses a tiny mirror cabinet as a "living room" Thereto,the team packed the atoms into a transparent crystal made of an yttrium silicate compound, which is five times thinner than a human hair. This crystal, in turn, is placed like a sandwich spread between two almost perfect mirrors. To eliminate the heat wobbling of the atoms, which is destructive to quantum information, the entire ensemble is cooled to minus 271 °C.

Photon ping-pong in the mirror cabinet 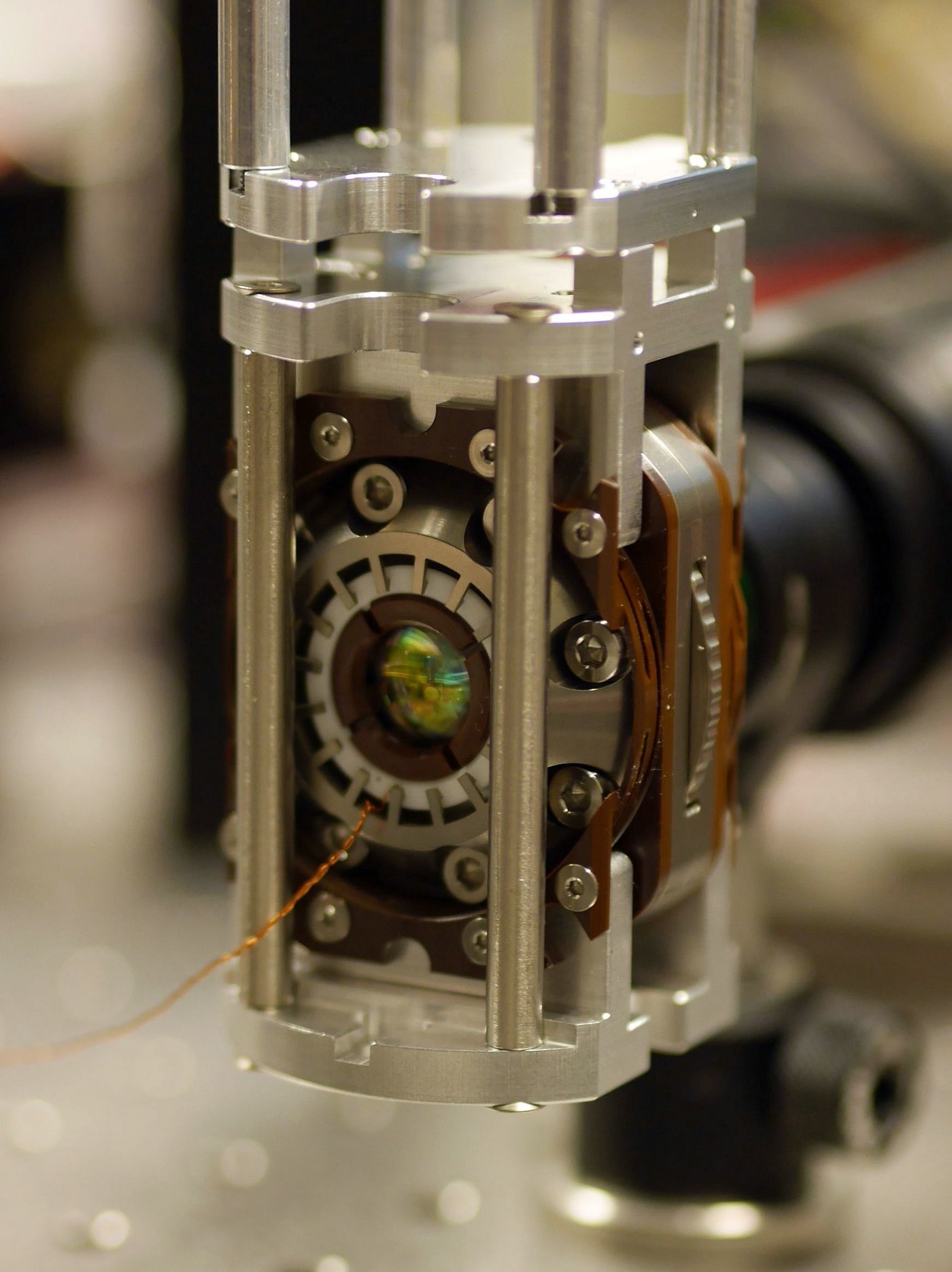 Approximately in the centre of the picture, the "mirror cabinet" can be seen from outside, which creates the connection between flying and stationary qubits.

The photons trapped between the mirrors are reflected back and forth through the crystal like ping-pong balls. They pass the erbium atoms so often so that  the atoms have enough time to react with a quantum leap. Compared to a situation without a mirror cabinet, this happens much more efficiently and almost sixty times faster. Since the mirrors, despite their perfection, are also slightly permeable to the photons, the modem can connect to the network.

"We are very happy about this success," Reiserer says. As a next step, he wants to improve the experiment such that individual erbium atoms can be addressed as qubits via laser light. This is not only an important step towards a usable quantum modem. Erbium atoms as qubits in a crystal may even serve directly as a quantum processor, which is the central part of a quantum computer. This would make the modem easily compatible with such quantum terminals.

With such an elegant solution, comparatively simply constructed "quantum repeaters" would also become possible. Every hundred kilometres, the devices would have to compensate the increasing losses of quantum information transported by photons in the fibre-optic network. Such “quantum repeaters” are also the focus of international research. "Although such a device based on our technology would cost about a hundred thousand euros, widespread use would not be unrealistic," Reiserer says.

The Garching quantum modem is still purely fundamental research. But it has the potential to advance the technical realisation of a quantum internet.