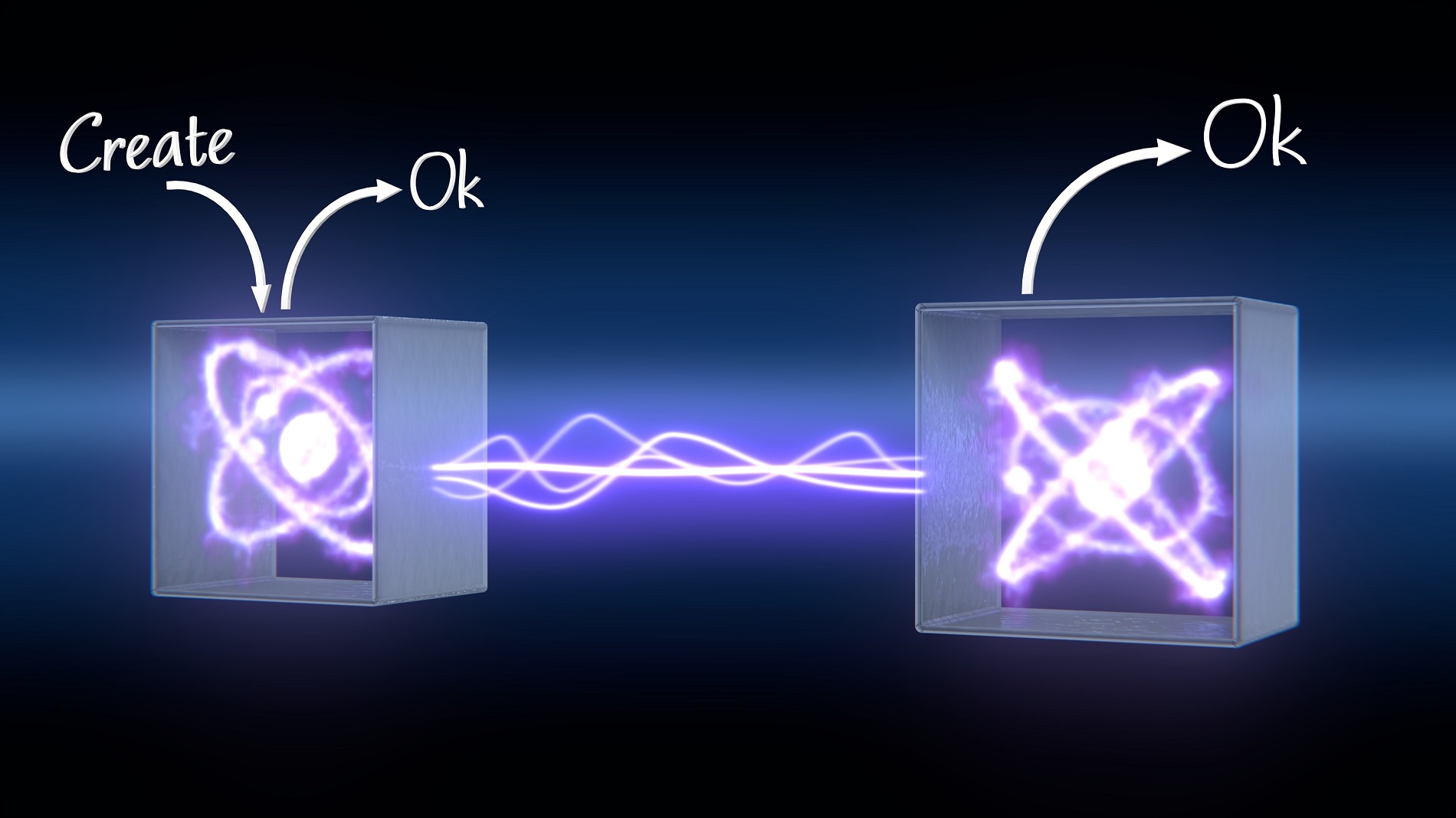 Using the link layer protocol, higher-layer software can request the creation of entanglement without needing to know which quantum hardware system is in the box. The image is free to use, image credit QuTech/Scixel.

Researchers from QuTech, a collaboration between TNO and TU Delft, have achieved a world’s first in quantum internet technology. A team led by Professor Stephanie Wehner has developed a so-called link layer protocol that brings the phenomenon of ‘quantum entanglement’ from a physics experiment towards a real world quantum network. This brings closer the day when quantum internet can become a reality, delivering applications that are impossible to achieve using a ‘classical’ internet. The work was published today at ACM SIGCOMM.

Robust data transmission
In classical computing, a collection of software layers referred to as the ‘network stack’ allows computers to communicate with each other. Underlying the network stack are communication protocols, such as the Internet Protocol or the HTTP protocol. Stephanie Wehner explained that one essential protocol used by a network is the ‘link layer’ protocol, which overcomes the problems caused by imperfect hardware: “All of us use classical link layer protocols in everyday life. One example is Wi-Fi, which allows an unreliable radio signal – suffering from interruptions and interference – to be used to transmit data reliably between compatible devices.”

A quantum network, based on transmission of quantum bits or ‘qubits’, requires the same level of reliability. Stephanie Wehner: “In our work, we have proposed a quantum network stack, and have constructed the world’s first link layer protocol for a quantum network.”

Demanding physics
It turns out that existing classical protocols cannot help in the quantum world. One challenge is presented by differences between the technologies used. Stephanie Wehner: “Currently, qubits cannot be kept in memory for very long. This means control decisions on what to do with them need to be taken very quickly. By creating this link layer protocol, we have overcome obstacles presented by some very demanding physics.”

There are also some fundamental differences between a future quantum internet and the internet that we see today. Stephanie Wehner said that two quantum bits can be ‘entangled’: “Such entanglement is like a connection. This is very different to the situation for classical link layer protocols where we typically just send signals. In that case, there is no sense of connection built in at a fundamental level.”

Quantum internet
The phenomenon of entanglement forms the basis of a quantum internet. When two fundamental particles are entangled, they are connected with each other in such a way that nothing else can have any share of this connection. Researcher Axel Dahlberg said that this enables a whole new range of applications “Security is one important application. It is physically impossible to eavesdrop on an entangled network connection between two users. To give another example, the technology also allows improved clock synchronization, or it can join up astronomical telescopes that are a long way apart, so they act as a huge single telescope.”

Building a quantum network system
Stephanie Wehner said that the next step will be to test and demonstrate a new network layer protocol using the link layer protocol: “Our link layer protocol allows us to reliably generate entanglement between two network nodes connected by a direct physical link, such as a telecom fiber. The next step is to produce entanglement between network nodes which are not connected directly by a fiber, using the help of an intermediary node. In order to realize large scale quantum networks, it is important to go beyond a physics experiment, and move towards building a quantum network system. This is one of the objectives EU-funded Quantum Internet Alliance (QIA).”