A recipe for creating a microscopic crystal structure that can hold two wavelengths of light at once is a step toward faster telecommunications and quantum computers. 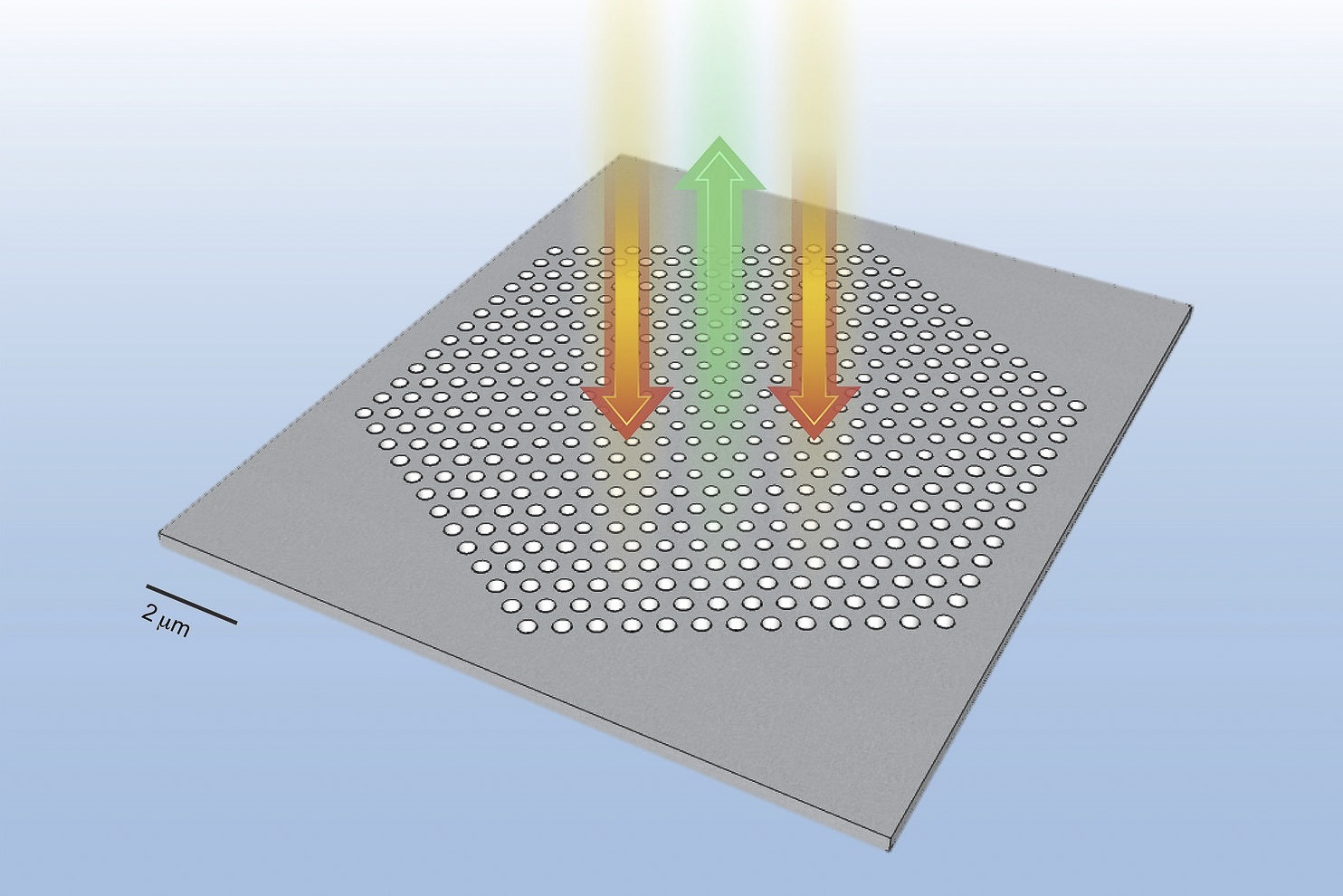 An illustration of the researchers’ design. The holes in this microscopic slab structure are arranged and resized in order to control and hold two wavelengths of light. The scale bar on this image is 2 micrometers, or two millionths of a meter. (Image credit: Momchil Minkov)

Five years ago, Stanford postdoctoral scholar Momchil Minkov encountered a puzzle that he was impatient to solve. At the heart of his field of nonlinear optics are devices that change light from one color to another – a process important for many technologies within telecommunications, computing and laser-based equipment and science. But Minkov wanted a device that also traps both colors of light, a complex feat that could vastly improve the efficiency of this light-changing process – and he wanted it to be microscopic.

“I was first exposed to this problem by Dario Gerace from the University of Pavia in Italy, while I was doing my PhD in Switzerland. I tried to work on it then but it’s very hard,” Minkov said. “It has been in the back of my mind ever since. Occasionally, I would mention it to someone in my field and they would say it was near-impossible.”

In order to prove the near-impossible was still possible, Minkov and Shanhui Fan, professor of electrical engineering at Stanford, developed guidelines for creating a crystal structure with an unconventional two-part form. The details of their solution were published Aug. 6 in Optica, with Gerace as co-author. Now, the team is beginning to build its theorized structure for experimental testing.

A recipe for confining light

Anyone who’s encountered a green laser pointer has seen nonlinear optics in action. Inside that laser pointer, a crystal structure converts laser light from infrared to green. (Green laser light is easier for people to see but components to make green-only lasers are less common.) This research aims to enact a similar wavelength-halving conversion but in a much smaller space, which could lead to a large improvement in energy efficiency due to complex interactions between the light beams.

So instead of making one uniform structure to do it all, these researchers devised a structure that combines two different ways to confine light, one to hold onto the infrared light and another to hold the green, all still contained within one tiny crystal.

“Having different methods for containing each light turned out to be easier than using one mechanism for both frequencies and, in some sense, it’s completely different from what people thought they needed to do in order to accomplish this feat,” Fan said.

After ironing out the details of their two-part structure, the researchers produced a list of four conditions, which should guide colleagues in building a photonic crystal cavity capable of holding two very different wavelengths of light. Their result reads more like a recipe than a schematic because light-manipulating structures are useful for so many tasks and technologies that designs for them have to be flexible.

“We have a general recipe that says, ‘Tell me what your material is and I’ll tell you the rules you need to follow to get a photonic crystal cavity that’s pretty small and confines light at both frequencies,’” Minkov said.

If telecommunications channels were a highway, flipping between different wavelengths of light would equal a quick lane change to avoid a slowdown – and one structure that holds multiple channels means a faster flip. Nonlinear optics is also important for quantum computers because calculations in these computers rely on the creation of entangled particles, which can be formed through the opposite process that occurs in the Fan lab crystal – creating twinned red particles of light from one green particle of light.

Envisioning possible applications of their work helps these researchers choose what they’ll study. But they are also motivated by their desire for a good challenge and the intricate strangeness of their science.

“Basically, we work with a slab structure with holes and by arranging these holes, we can control and hold light,” Fan said. “We move and resize these little holes by billionths of a meter and that marks the difference between success and failure. It’s very strange and endlessly fascinating.”

These researchers will soon be facing off with these intricacies in the lab, as they are beginning to build their photonic crystal cavity for experimental testing.

This research was funded by the U.S. Air Force Office of Scientific Research, the Swiss National Science Foundation and the QuantERA ERA-NET Cofund in Quantum Technologies.

To read all stories about Stanford science, subscribe to the biweekly Stanford Science Digest.