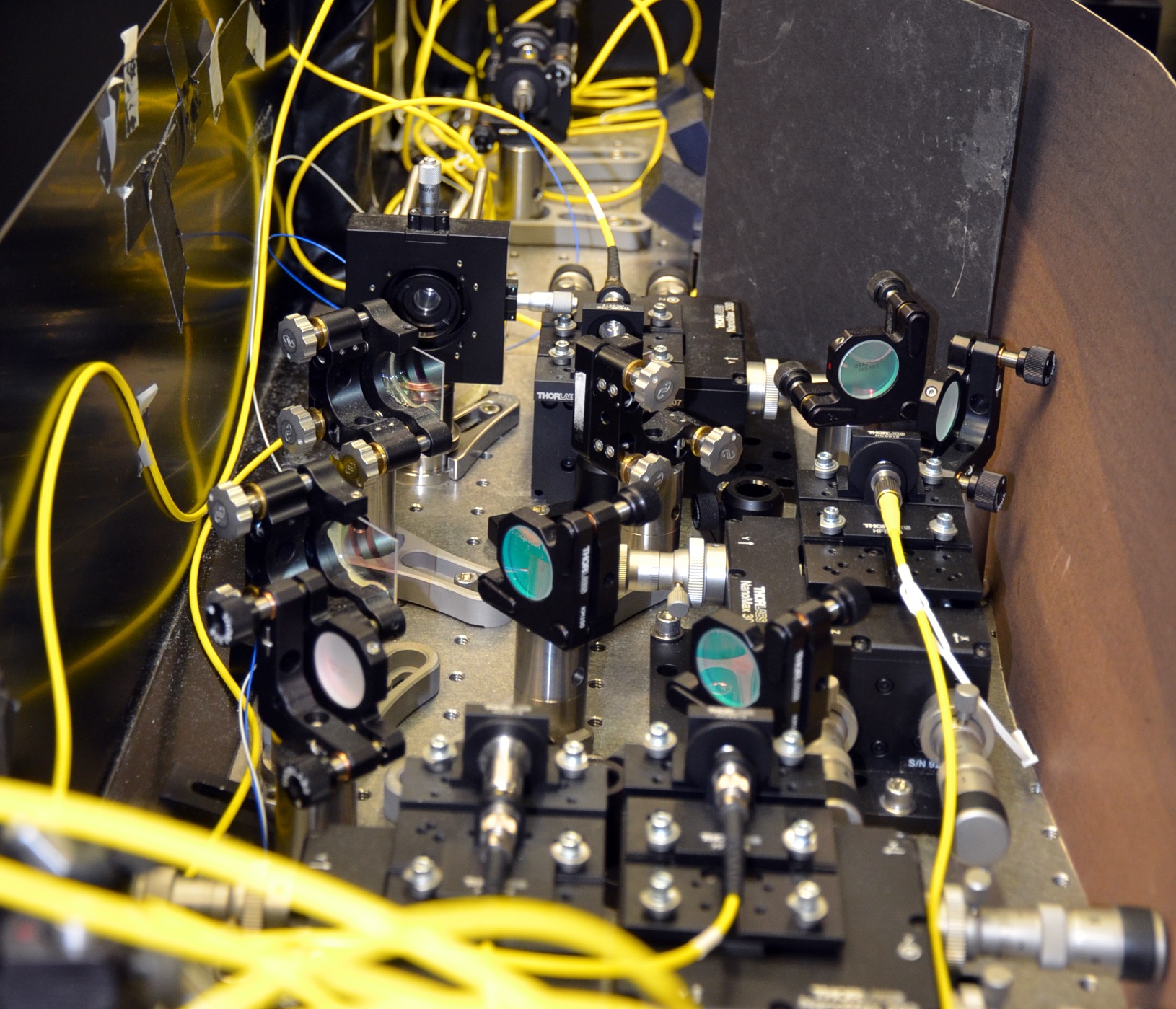 The experimental setup in Kwiat’s lab at the Loomis Laboratory of Physics. Siv Schwink/Illinois Physics

Kwiat explains, “A photon is the smallest unit of light: Einstein’s introduction of this concept in 1905marked the dawn of quantum mechanics. Today, the photon is a proposed resource in quantum computation and communication—its unique properties make it an excellent candidate to serve as a quantum bit, or qubit.”

“Photons move quickly—perfect for long-distance transmission of quantum states—and exhibit quantum phenomena at the ordinary temperature of our everyday life,” Kaneda adds. “Other promising candidates for qubits, such as trapped ions and superconducting currents, are only stable in isolated and extremely cold conditions. So the development of on-demand single-photon sources is critical to realizing quantum networks and might enable small room-temperature quantum processor.”

To generate single photons, quantum optics researchers often use a nonlinear optics effect: in a designed crystal, within a laser pulse containing billions of photons, a single high-energy photon can be split into a pair of two low-energy photons. With such photon pairs, the presence of a twin single photon can be “heralded” by detecting the other—of course, detection eliminates the one photon, so only a single photon—the heralded photon—is produced. However, the generation efficiency of heralded single photons is low, at most 25 percent.

Kaneda explains, “Photon pairs and heralded single photons can only be produced probabilistically. Most of the time—typically with over 90 percent probability—an excitation of the crystal is unsuccessful. Moreover, if the laser pulse is too intense, the crystal can emit multiple photon pairs, which would cause errors in most quantum information applications.”

To overcome the intrinsic challenges of reliably generating heralded photons, the team has demonstrated a “time-multiplexing” scheme. A heralded single-photon source is periodically excited by a number of laser pulses. Each pulse defines one “time bin,” each of which could hold a pair of photons. Although the success probability in each excitation event is low, the repeated excitations can produce single photons with a much higher likelihood. The heralded photons reveal which time bins contain a photon. The team developed an optical quantum memory to store the heralded photons for an arbitrary number of cycles. Using this, photons initially produced in any of the possible time bins can be delayed and emitted at a pre-fixed time. Thus, the presence probability of a single photon at the pre-fixed time can be temporally multiplexed and largely enhanced.

Kaneda explains, “The key challenge of our experiment was optical loss; loss in the quantum memory is particularly detrimental for large-scale multiplexing. Therefore, our multiplexing scheme needs to be implemented with very low-loss components. Although solid-state and atomic quantum memories have been intensively studied in recent years, their large insertion loss can almost immediately eliminate photons, and their narrow bandwidth requirements can only store very long optical pulses. Our optical-ring-based memory comprising highly transmissive and reflective optics can efficiently delay photons to multiplex several tens of excitation events.”

The team has successfully multiplexed up to 40 sequential excitations of a heralded single-photon source, achieving record generation efficiencies—as high as 67 percent presence probability into a single-mode optical fiber, which is substantially higher than has been achieved with any other approach to date.

“The time-multiplexed source can be further improved, incorporating currently available state-of-the-art optical technologies, including ultra-efficient superconducting single-photon detectors,” comments Kwiat. “Planned upgrades to our time-multiplexed sources would enable us to simultaneously generate 30 to 50 individual photons. While that might sound very small as a number of qubits compared to the number of bits handled by ordinary computers, quantum computation with even such a relatively small number of photons could be comparable or faster than a supercomputer for some types of computations.”

The team’s recent findings were published online in Science Advances on October 4, 2019. The National Science Foundation, the U.S. Army, and the U.S. Navy supported this work. The conclusions presented are those of the researchers and not necessarily those of the funding agencies.