Physicists from the Max-Planck-Institute of Quantum Optics produced electron pulses from a laser accelerator whose individual particles all have nearly the same, tuneable energy. 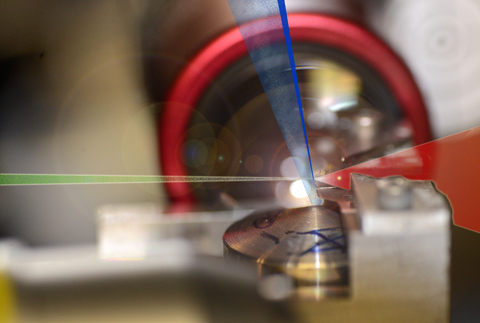 Figure caption: A laser pulse (red) hits helium atoms (blue), streaming from a nozzle with supersonic velocity. A very compact and controlled difference in density (dark blue ray) develops due to the partial obscuring of the nozzle by a razor blade. Precisely at this difference in density, the laser pulse hits the helium atoms, separates the electrons and accelerates them to nearly the speed of light. Since the electrons are all separated at the same location and same time from the atoms, they nearly gain the same energy. Figure: Thorsten Naeser

Electrons with a velocity close to the speed of light are hard to control. Using them as a tool for applications at the frontier of ultrafast physics requires them to be packed into extremely short pulses with tunable energy. A team around Laboratory for Attosecond Physics (LAP) group leaders Dr. Laszlo Veisz and Prof. Stefan Karsch, both based at the Max-Planck-Institute of Quantum Optics (MPQ) has now achieved that feat by using a laser-driven accelerator. They created electron pulses with few-femtosecond duration, whose many individual particles all have nearly the same, but widely tunable energy. These monochromatic electron pulses can be used to create ultrashort flashes of light in the extreme ultra-violet or even X-ray range, who in turn are a versatile tool for probing fast processes in the microcosm. (Physical Review Letters, May 02, 2013).

Bunches made up of electrons travelling close to the speed of light have a great potential in medicine or probing the microcosm, if their properties can be well controlled. Usually such pulses are provided by conventional radio-frequency (RF) accelerator systems, which are on one hand large and costly and on the other hand can only provide ultrashort particle bunches with even more costly tricks and great particle losses. Accelerating particle bunches with a laser might become a viable workaround for these problems. Its main problem, however, has always been the difficulty of giving the same energy to all particles in a bunch, and hence creating “cool” bunches. Once this issue can be overcome, it would allow a much better control of the bunch properties and their adaptation to the application in mind.

A conventional RF-accelerator always contains a particle source defining the number of particles in a bunch, its pulse duration and energy width, and an acceleration section defining the final energy. In a laser accelerator, a defined particle source has been missing so far, and the electrons to accelerate were trapped randomly along the acceleration distance.  This causes their energy distribution to become broad. The team around Laszlo Veisz and Stefan Karsch has now shown how to integrate a particle source into a laser accelerator and use it to create bunches whose individual particles all have nearly the same energy.

In the experiment, the physicists released helium atoms from a small nozzle at supersonic velocity. Directly above the nozzle they placed a razor blade such that it obscured a part of the nozzle orifice. After the supersonic helium stream is released from the nozzle and hits the razor blade edge its forms a shock front and hence a density step in the gas. At precisely that position the researchers focused an extremely strong laser pulse with a duration of 28 femtoseconds (One femtosecond is one millionth of a billionth of a second).

This laser pulse forms a plasma channel, i.e. it separates electron from their atoms, accelerates them close to the speed of light within a few 100 microns, and gives them all approximately the same energy. The salient point for the generation of a monochromatic electron pulse is the fact that all electrons start their journey at the shock position and therefore travel exactly the same acceleration distance until the end of the gas jet, and hence gain the same energy. Without the shock front, different electrons would start at a random position and gain different energy. “By changing the position of the razor blade above the nozzle we can determine where the density step is formed and hence how long the acceleration distance is, and what energy the electrons gain” explains Laszlo Veisz.

Perfectly controlled, ultrashort electron pulses can be used in turn to generate femtosecond flashes of light all the way down to the X-ray regime. They might be used to “shoot” images of fast processes in the microcosm. Medical applications are conceivable as well: Compact, cheap and well-controlled laser accelerators with high beam quality might disseminate new, dose-reduced X-ray imaging techniques to serve a large number of patients for diagnostic purposes. Thorsten Naeser