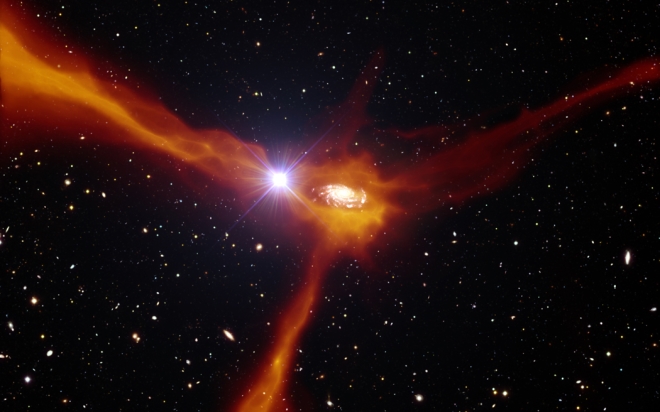 (Santa Barbara, Calif.) –– An international group of astronomers that includes UC Santa Barbara astrophysicist Crystal Martin and former UCSB postdoctoral researcher Nicolas Bouché has spotted a distant galaxy hungrily snacking on nearby gas. The gas is seen to fall inward toward the galaxy, creating a flow that both fuels star formation and drives the galaxy's rotation. This is the best direct observational evidence so far supporting the theory that galaxies pull in and devour nearby material in order to grow and form stars. The results will appear in the July 5 issue of the journal Science.

Spiral galaxies like our own Milky Way formed billions of years ago in the dark matter concentrations that began to grow shortly after the Big Bang. As gas cooled and condensed, stars formed, which, over time, synthesized heavy elements and polluted the galaxy with this enriched material upon their death.

But what that model has not been able to explain is the continuous formation of stars in some galaxies, despite the constant rate at which galaxies turn molecular gas into stars. The simplest model calls for a closed system and predicts star formation should have ceased long ago due to the limited gas supply.

"It's been a problem," said Martin. Galaxies should use up their gas on a time scale that's much shorter than what has been observed, she explained. In fact our own galaxy should have already run out of gas, but stars continue to form in it. "Galaxies must have a mechanism for acquiring more gas," she continued, adding that, historically, no means has existed to directly detect the inflow of the cold fuel.

Now, however, thanks to the background light from the quasar HE 2243-60, Martin and her colleagues have been able to observe distinct signatures near a typical star-forming galaxy that indicate the inflow of gas feeding the galaxy. In this scenario, gas is drawn into a galaxy and then circles around it, rotating with it before falling in. Although some evidence of such accretion had been observed in galaxies before, the motion of the gas and its other properties had not been fully explored until now.

The background quasar is, by chance, perfectly well positioned for this study. "This kind of alignment is very rare, but was critical for this study," explained first author  Bouché, who is now with the Research Institute in Astrophysics and Planetology in Toulouse, France.

The astronomers used two instruments known as SINFONI (Spectrograph for INtegral Field Observations in the Near Infrared) and UVES (Ultraviolet and Visual Echelle Spectrograph), both of which are mounted on European Southern Observatory's Very Large Telescope at the Paranal Observatory in northern Chile. The new observations showed both how the galaxy itself was rotating and revealed the composition and motion of the gas outside the galaxy.

The result is the discovery of how an active star-forming galaxy feeds its prodigious growth, according to co-author Michael Murphy, from the Swinburne University of Technology in Australia. "[We've] observed, as directly as possible, the feeding process for forming huge numbers of stars very quickly 11 billion years ago," he said. The observation also strengthens the argument that low-mass galaxies are formed through these cold streams, which also allow galaxies to prolong their star formation process.

"It is impressive to see in the data the telltale signatures of this infalling gas matching those expected in numerical simulations," said Bouché. 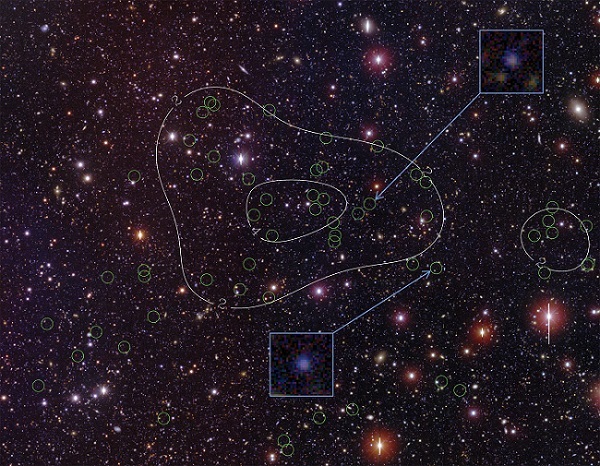 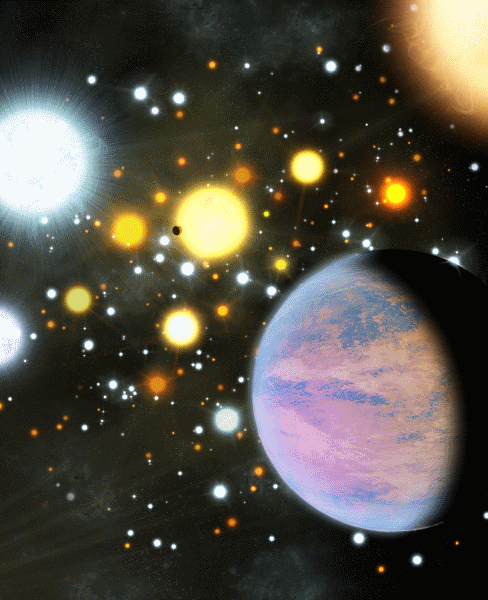